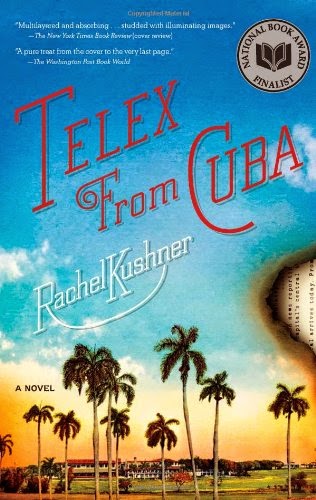 Rachel Kushner's novel about American expatriates in the waning days of the Batista regime vividly describes the beauty and appeal of Cuba. She immerses the reader in the life of families attached to the United Fruit Company's sugar operations in eastern Cuba and the nearby nickel mine operated by the U.S. government.

Our book group read this on the recommendation of a member who read it before visiting Cuba. He liked it then and liked it even better re-reading it after his trip. The book made me feel like I'd visited Cuba, too. However, I have several issues with it. There are too many characters and too many points of view. Particularly bad, in my view, is shifting from one first person narrator to several other third-person POVs. The characters were not sharply enough delineated, so names and roles became a muddle for someone reading it over several weeks. There were vivid scenes and the narrative held together over several years because we are familiar with the arc -- Batista's ill-fated and corrupt regime succumbing to Castro's revolution.

What worked well was the depiction of how clueless the expats were, with their feeble complaints about the tropics, their racism and bigotry, their pathetic efforts to preserve a semblance of stateside life. The particular trap of the expat who is earning more money and/or living better than they could at home -- similar to the plight of the British couple in Hilary Mantel's Eight Months on Ghazzah Street -- was very well sketched. Several of the characters grew up in the eight years covered, but it is hardly a coming of age. Rather the author wants to view the corruption of the adults and their ambivalent relations with the Cubans and Haitians that worked for them through their innocent eyes.

The rogue arms salesman and sometime rebel, Christian La Maziere -- apparently an historical figure -- was the cynical counterpoint to this hypocrisy. He is actually more fully developed as a character than any of the others, but he is too sleazy and unsympathetic to really carry the narrative. Castro makes a cameo appearance but remains a blur. A popular courtesan, sillily named Rachel K, wafts through the book without making much of an impact.

Despite its strengths, then, the book ultimately was unsatisfying on a dramatic, aesthetic level. The epilogue was particularly flat -- too true to the disappointments of maturity as we learn the banal destinies of these kids grown up. I'm perplexed that this book was a finalist for the National Book Award in 2008, just as Kushner's second novel, The Flame Throwers, was also shortlisted. Who does she know?

The book was worthwhile for its depictions of Cuba but I'm in no hurry to read the second book.
Posted by Darrell Delamaide at 2:04 PM