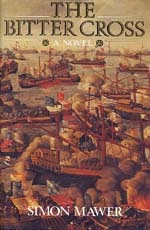 Simon Mawer's historical novel, his second, is a grim portrayal of corruption and betrayal. As with his later The Gospel of Judas, it is about an illicit love affair involving a man of God who betrays his vow of celibacy, giving the lovers a shred of happiness but dooming them to death and separation.

What's evident already in this early work is Mawer's wonderful command of language, a diction that is rich -- perhaps a little over-rich waiting for the discipline of later works -- and a literary quality that gives his prose a texture even as he tells a compelling story.

The story here concerns Gerard Paulet, one of handful of English Knights of Malta to survive Henry VIII's persecution of Catholics, who along with his comrades ends  up in exile at the order's headquarters in Malta. The Knights of St. John themselves are in exile, having been driven out of Rhodes to the small island in the Mediterranean that Mawer describes with the scorn of one who actually lived there.

His details of the knights, their galleys, their ships, the geography of the Mediterranean match a David Mitchell or Patrick Leigh-Fermor in their precision and arcane knowledge. Presumably the history, too, is accurate. It makes for a colorful background for the tortured affair between Paulet and the widowed princess of the island, Vittoria Pignatelli. It is, as with the affairs in Gospel and The Glass Room, an irresistible passion that brooks no denial -- not a choice, but a destiny. There is nothing Platonic about it, the happiness comes from carnal knowledge in defiance not only of Paulet's vows but the rigid social convention, which, as Vittoria's brother patiently explains to Paulet, does not allow a noblewoman like his sister to have an affair with someone below her station, for the knight is only "gentle."

The two lovers remain true to each other but there is distrust, which feeds on the betrayal of those around them as they are caught up in the intrigues of Renaissance Italy, the fight against the Turks for the control of the Mediterranean and Europe, and the dying throes of a crusading military order that has outlived its purpose.

There are intimations of the denoument because the story is told in the first person by an aged and broken Paulet, living out his days peacefully in the knights' priory in Rome. The author skillfully weaves the story backward and forward in time, maintaining the suspense not of what happens, but how and why.

Paulet is convincingly complex, torn as the protagonist in Gospel not only by the broken vows but the loss of faith as the joy of human coupling undermines belief in a religion that demands celibacy for its holy men. He nonetheless tries to preserve a certain semblance of honor, though his ambivalence in the climactic end of the novel leaves the reader uncertain how far he succeeds.

Much of the plot turns on his suspect "adoption" of a Muslim boy captured during a raid. His account of why and how he took the boy as his ward seems incomplete -- there is no sufficient motivation given. Later, given the turn of events, the reader begins to suspect that he is in fact an unreliable narrator, that he has not told the whole story.

The book is a downer. The cynicism is all-pervading, leavened with only the faintest glimmer of hope that the shared passion of Paulet and Vittoria is sufficient for redemption. It is, in the moral morass of Renaissance Europe, a true emotion, however many vows and conventions are broken. It sets the themes that run through Mawer's later novels, different as they are in setting and context.
Posted by Darrell Delamaide at 7:10 PM