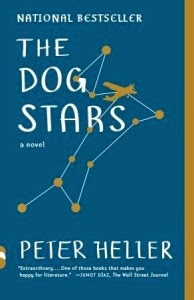 Peter Heller's post-apocalyptic novel grabs you by the throat and doesn't let go. It took a few pages to get used to the style -- paragraphs with extra separation and sentence fragments. But these are graphic and linguistic representations of the fragmented world left after a virulent flu and blood disease have killed most of the planet's inhabitants.

The first-person narrator, Hig, is himself fragmented. Much of what he cherished has been destroyed, but he goes on surviving without being sure why. He put a pillow over his wife's face at her urgent request to end her suffering at the end and has been emotionally shut down since then. Such consolation as there is comes from his dog, Jasper, and some activities that were hobbies before and now are useful survival skills -- hunting, fishing, flying.

He lives in a hangar at a small airfield in Colorado and patrols the "perimeter" he and his partner, Bangley, have set up in an ancient Cessna. For mankind has been reduced to savagery in a truly kill or be killed environment. Intruders are killed without any questions asked. Hig worries that Bangley, a weapons expert with an uncertain past, will eliminate him if he outlives his usefulness as a comrade in arms.

What disrupts this dystopian existence is a cryptic radio call he intercepts in the plane one day, indicating there may be a functional settlement in Grand Junction. Eventually, Hig sets out to track this signal and has his first encounter with other people that does not end in death for one side or the other and rekindles long-dormant emotions.

The first-person narration works well in this context. There are so few people, there is little for an omniscient narrator to know. Hig's flat, fragmented narration is nonetheless eloquent, sometimes lyrical and often poignant, without any pretension or artifice. The reader's enormous sympathy for his plight and the suspense of the story propel you through the book.

Heller, a product of the Iowa Writers Workshop as well as a magazine writer and author of several nonfiction books, has a disciplined command of language. The prose, the story, the narration are extremely lean, trimmed of any distraction or unnecessary detail -- a kind of post-modern Hemingway.

Can a post-apocalyptic novel have a happy ending? Everything is relative when people are stripped of civilization. Suffice it to say Heller's view is ever so slightly more hopeful than that of Cormac McCarthy in The Road -- but there are no guarantees.
Posted by Darrell Delamaide at 6:01 AM