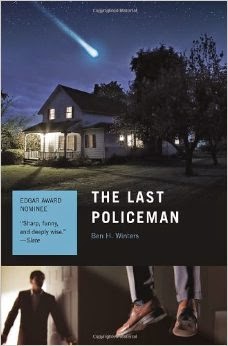 Hank Palace has finally achieved his childhood dream of becoming a detective in the Concord Police Department. The only hitch is that shortly afterwards it was announced that a comet was on a path to collide with the earth in a few months, and was likely to destroy all life on the planet.

This "pre-apocalyptic" setting turns Ben H. Winters' police procedural into a psychological thriller. In many ways, the imminent collision with the comet is itself apocalyptic as the structures of industrial society gradually corrode and crumble. Companies go bankrupt, the telecommunications infrastructure collapses in pieces, and, not surprisingly, suicides spike.

So when a mild-mannered actuary expert is found dead with a belt around his neck tied to the doorknob -- the more efficient way of suicide by hanging, we are told -- it is logical to assume that he is simply another "hanger." But Hank is not comfortable with this verdict. The victim had shown no suicidal tendencies; there was no note; there were other bruises unaccounted for.

The question is, however, what does it matter -- suicide or murder? Why work hard to bring a killer to justice when everyone is doomed to die in just a few months? Hank's colleagues scoff at him and tease him about his unaccountable obsession. At one point, he becomes frustrated and tells the medical examiner that he may not be the type of person for an end-of-the-world scenario. To which she replies that he may be the only type suited to it.

This is the nub of the novel. What is it that keeps a man bound to duty even in the face of imminent catastrophe? An engaged reader is confronted with the question of how he or she would react in a similar situation. It is a tribute to Winters' skill as a writer in creating this improbable situation in way that you ask yourself this question seriously.

It is in a sense the human condition writ large, because each of us faces imminent doom. But our individual doom does not obviate the need for laws to govern society and police to enforce them. With life as we know it about to end, any prison term -- whether for murder or a minor infraction -- is a virtual life sentence.

This is the backdrop for Hank's investigation into the life and sudden death of the insurance employee who was a whiz at actuarial tables and an obsessive observer of the deadly comet's progress. Hank encounters a long-lost childhood friend of the victim who recently reestablished contact; his estranged sister, a midwife, and her husband, a preacher newly specialized in end-of-the-world counseling; a colleague at work who seemed unaccountably concerned about the victim; his boss, and others, any of whom could be suspect in what Hank stubbornly believes to be a murder.

All of this is told in a quirky first person, with Hank able to say things like "holy moly" with a straight face. He is sympathetic because there is at least a little bit of Hank in each of us -- an idealist who want to hold on to some shred of naivete and pursue a life that is above all honorable.

Winters apparently intends chronicle these last six months of life on earth in a trilogy, and has already published the second volume. What fun.


Posted by Darrell Delamaide at 9:51 AM