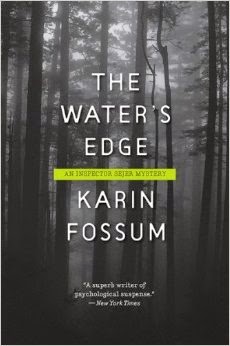 Karin Fossum is not just another Scandinavian writer cashing in on the current fashion for detective stories from that region. Her spare, direct narration has more in common with classic hardboiled than with the florid Stieg Larsson, and only slightly less florid Jo Nesbo. Her Oslo detective, Konrad Sejer, does not suffer the inner torment of a Kurt Wallander or Harry Hole or Erlandur.

Fossum sketches in the bleak northern landscapes that are so essential to Scandinavian noir. But her focus is more on the quirky relationships that alternate between terse exchanges and more extended riffs between characters. One of her hallmarks, apparently, is the time she spends with minor characters -- as, in this instance, with the couple who find the body of the abused boy that opens this case. We see much more the interior life of the wife, Kristine Ris, than we do of Sejer himself. And in many ways, the novel is as much her story as it is Sejer's and his effort to solve the mystery of first one pedophile killing and then the disappearance of a second boy.

But Sejer's conversations with his Dr. Watson, Jacob Skarre, on why they became policemen and what is the positive contribution they can make are also entertaining, and somehow manage not to interrupt the flow of the narrative, but in fact let the reader catch his breath before galloping off after the next clue.

Another hallmark of Fossum's tales, it seems, is some sympathy for the villain. She neatly creates the circumstances that contribute to their flaws without any liberal, heart-on-sleeve gushing. It is Sejer's insight into this human condition that enables him to unravel the mystery, ignore the red herrings, double back on overlooked clues, and try to mend the damage to those who are not directly the victims of the crime -- or rather the killing, but it is not sure in some cases that a crime has been committed.

Sejer tracks down the perpetrator of the deaths in this mystery. Fossum leaves some sympathy for them as well as for other characters who might just as easily have found themselves branded as criminals if they had been equally unlucky and in the wrong place at the wrong time. I'm curious now to read a second Fossum novel with Sejer to see how many of these traits are repeated.
Posted by Darrell Delamaide at 9:39 AM