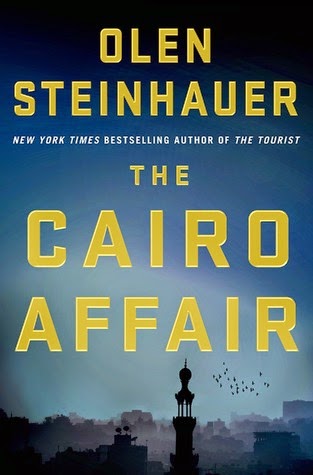 I've blown hot and cold on Olen Steinhauer and this is the first thriller of his that I've finished. Comparisons to Le Carre are more aspirational than actual, but this book succeeds in creating an atmosphere of moral ambivalence that is quite convincing.

What attracted me to the book, bought on remainders, was the setting in Cairo -- which is where I would like to situate the second Lord Leighton adventure. There is the obligatory passage through Budapest because Steinhauer seems to really like that city (his first novel, Prague, was actually set in the Hungarian capital). Cairo itself is conveyed a little too sketchily, but the desert scenes are good. Also, interestingly, the drive along the coast into Libya was like those coastal trips of Robert Wilson's protagonist in Instruments of Darkness, giving the reader a new sense of place by bringing alive a stretch of the map.

Steinhauer's narrative here from multiple points of view means there is no single protagonist. Rather, it is like a relay race with first one, then the other character taking on that role. The author makes it clear which of these runners he finds most sympathetic, but even in that case there is some moral ambivalence. The end result, however, is somewhat less than satisfying, because none of the characters then is fully developed.

The action revolves around an American couple, a diplomat who is murdered early on and his wife. We meet Emmet Kohl again in flashbacks to their oddball honeymoon, which for some reason they decided to take in the war zone of Novi Sad. Sophie Kohl is the one thread from the beginning of the book to the end, but she shares screen time with the other characters. She improbably decides to go from Budapest, where her husband was killed, to their previous posting in Cairo to see if she can find out why he was killed. It is a premise already that requires considerable suspension of disbelief and we are never given a convincing motivation for it.

The rest of it, however -- the CIA staff in Cairo, the Egyptian secret service, the rogue operators stretching from the Balkans to the Maghreb -- is full of betrayal and twists that are indeed Le Carre-esque. Above all, the inescapable bureaucratic element of intelligence services is convincingly portrayed. The plot, based on the Arab Spring and the Libyan overthrow of Qaddafi, is quite timely.

It is, in short, an ambitious novel, reasonably well executed and well written. Le Carre it is not, but worth reading on its own merits.
Posted by Darrell Delamaide at 12:45 PM