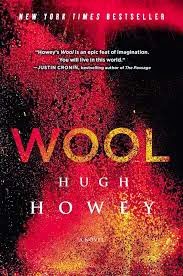 Hugh Howey's science fiction epic is a satisfying post-apocalyptic thriller that keeps the reader turning pages. His vision of a remnant of civilization confined to a silo buried 140 stories into the earth is convincingly claustrophobic. The physical restrictions are stifling and require an equally stifling society where books are banned and every individual is assigned a work category (and silo level) with the appropriately colored overalls.

In a Q&A tacked on the end of my paperback edition, Howey says his time at sea and the confinement of living on a boat gave him the insight into silo life. The interminable climbs on the spiral stairway down the length of the silo are depicted so graphically that your legs are sore. Trips from top to bottom take days, with rest stops at various levels. "Porters" are the specialists who carry every pound of food and supplies on their backs from the garden and farming levels to the top and bottom. Communication is severely restricted. There are no computers for general use and paying a porter to carry a message is expensive.

All of this is effectively ruled by IT, a satirical touch that would be hilariously funny if it were not so grimly realistic. Sham elections choose a mayor, who appoints a sheriff (with the advice and consent of the head of IT). This is the world that Juliette, a mechanic housed in the lowest reaches of the "down deep" disrupts. When the mayor, Jahns, defies the head of IT, Bernard, to choose Juliette as the new sheriff, he quickly moves to frame Juliette with one of the numerous offenses that condemns a resident to "cleaning," the euphemism for being sent out into the toxic outside world in a suit designed to fail quickly. The cleaning refers to their obligation to wipe clean the monitors that are the only view the silo's inhabitants have of the outside world. Oddly, the condemned individuals invariably comply with this requirement, even though they gain nothing by it and die almost immediately afterwards. The wool of the title, by the way, appears to refer to the material they are given to clean the monitors, though of course the expression "pull the wool over your eyes" quickly comes to mind.

There are surreptitious references to an "uprising" that occurred several generations ago, when some individuals became impatient with restrictions of silo life and rebelled. It was put down violently and it is now a capital crime to discuss it. Just how many centuries people have been living in the silo and how many uprisings there have been are all vague. The novel begins, in fact, with the wife of Juliette's predecessor as sheriff, Holston, discovering some of these historical truths still preserved on IT's servers. She loses it and demands to be sent out to "cleaning." After grieving for three years, Holston follows suit. Neither makes it up the hill surrounding the silo. They curl up and die in view of the silo monitors and the residents up top who regularly enjoy.

This is the setup, and it's not too much of a spoiler to conclude that making it over that hill or fomenting a new uprising might be part of the narrative. The cynical nature of IT's control and the origins of the silo are revelations that drive the narrative as well.

Wool is often compared to The Passage by Justin Cronin, but I actually found this to be a tighter and more readable narrative. It eschews the supernatural element that makes the earlier book fantastical, and in fact revels in the low-tech expertise of Juliette and her companions in Mechanical. Her ability to survive comes to depend on that practical knowledge.
Posted by Darrell Delamaide at 1:36 PM