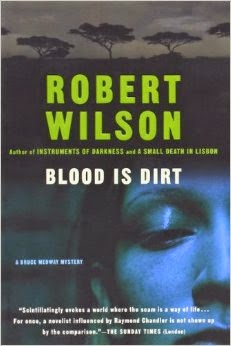 Despite my reservations about the first novel in the series (Instruments of Darkness), here I am already reading another Bruce Medway mystery by Robert Wilson. It is the evocation of the West African atmosphere, and perhaps the stench of corruption that Wilson has mastered that drew me back. It's an easy read, though he may have lost me on a twist or turn or two in the convoluted plot of a double scam within a scam, preceded by a fake scam and accompanied by a fair amount of mayhem.

Nonetheless, the corruption and hypocrisy oozes out of every pore of most of these characters, with the first-person narrator (Medway), his girlfriend Heike and his partner Bagado being the notable exceptions. This plot involves a British shipbroker who ships toxic waste and colludes with a British financier to cheat an Italian oil dealer (I think) -- which predictably does not end well for many of the people involved.

There are some outlandish characters -- the shipbroker's daughter, Selina, who becomes Medway's client and is a man-eating vixen; the Nigerian chief running for president of the country who needs financing for his campaign; some small-time Russian thugs who craft their own chili vodka, and others.

The portrayal of a key "queer" character betrays more than a whiff of homophobia, so I'm not sure what planet Wilson is living on or if he is deliberately being politically incorrect. There is considerable brutality but much less of the masochism that marked the earlier book. Medway doesn't get hurt too badly nor are Heike (too much of her in this book) or Bagado (too little of him) ever at risk from the bad guys.

And there's the driving along the coast between Nigeria and Benin, the ever-present heat and threat of malaria, the exotic forests and bays and beaches of the coastal setting, the cynical lifestyles of wealthy expatriates -- the stuff, in short, of a pretty good story.
Posted by Darrell Delamaide at 2:15 PM