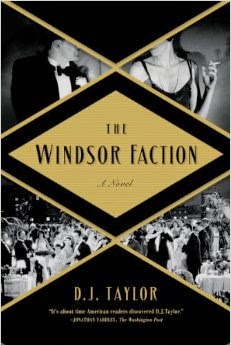 D.J. Taylor's novel starts with a great premise for an alternate history -- Wallis Simpson dies of appendicitis so that Edward VIII does not abdicate but stays on the throne as World War II commences -- and provides an entertaining portrait of England torn between pacifism ("defeatism") and war.

However, spoiler alert, Taylor doesn't alter history all that much. Edward is portrayed as a weak and vacillating individual whose half-hearted support for the defeatists did little in fact to change anything. Rather, the ham-handed conspiracy of the novel, involving several historical figures, ended largely as it did in real history. British intelligence monitored the conspirators closely and when Germany did invade France, abandoning all pretension of seeking peace, the conspiracy collapsed and everyone was arrested.

So as an alternate history thriller, The Windsor Faction doesn't live up to its billing. As a satire poking fun at British society and a richly detailed picture of England in 1939, however, it makes for a good read. The wit, to use a cliche, is rapier-sharp, and the dissection of motivation of the multiple narrators is surgical. From the king on down through the conspiring aristocrat, the upper-class ingenue and her more sophisticated mentor, the foppish publisher and traitorous editor of a literary journal, the laconic gadabout writer, the oily clerk in the American embassy, to the distracted intelligence agents, the middle-class proprietors of an antique shop and the thuggish prol who works there -- each character is sharply delineated, fleshed out and made more  or less sympathetic to the reader.

There is not much suspense because the characters are not a credible threat to the established order. Rather they are a marginal, quirky, misguided footnote to history, alternate or real.

The writer adopts several different points of view -- including one in first person via a diary -- so that there is no clear protagonist. Cynthia Kirkpatrick, a young woman whose fiance is killed in a tragicomic manner while her family is stationed in the British colony of Ceylon, comes closest to being the character who binds the action together. She is the first we meet and plays a key part in the denouement. But other characters get their chapters as well, including Beverley Nichols (male despite the first name), an historical character who is deployed in the novel as an amanuensis for Edward to produce a very different sort of King's Speech in that fateful December 1939.

The king's pacifist tones do little to significantly sway public opinion, however, and the authorities dispatch him ("this is not a suggestion, but an order") to the distant provinces for inspection tours to keep him out of trouble. In the meantime, the emboldened conspirators try to surreptitiously negotiate a peace treaty with Germany, but time runs out before the French invasion.

I'm not a fan of multiple narrators, no more than I am of small plate restaurants. The snippets may be tasty, but not as satisfying as a full meal. Also, the details of period brands and manners and jingles and language are sometimes too rich and inserted gratuitously in a way that interrupts the flow.

That said, Taylor is a talented and supple writer and the novel remains compelling even without a thriller's suspense.
Posted by Darrell Delamaide at 7:37 AM