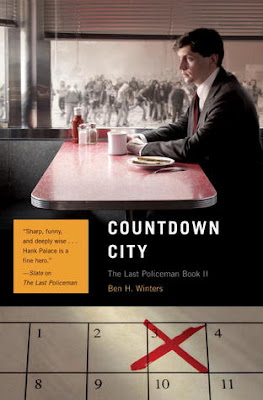 Ben Winters tale of a world facing extinction as an asteroid approaches might seem like a one-joke novel that does not lend itself to a sequel, let alone a series. But this second of three novels is so imaginative and inventive that it continues to surprise the reader. The narrator, Henry Palace, is a straight-laced police detective who can't think of any better way to await Armageddon than to continue doing his job. He debuted in The Last Policeman, and this sequel has him investigating another possible crime even though the Concord Police Department has closed down its detective department and kept only uniformed cops patrolling as a way to maintain some semblance of law and order in a world that is rapidly losing its tenuous connection to civilization.

As the countdown to the asteroid goes on -- it is around 75 days away in this novel -- Henry, sometimes Hank, promises his former babysitter he will look for her husband, who has disappeared. Of course, people disappear all the time in this end-of-days scenario, no longer feeling bound by any obligations. Some kill themselves, others travel to hedonistic meccas (New Orleans seems to be the main one) to spend the final days in revelry, others have their personal bucket lists. But Martha Milano is convinced that her husband, a former state trooper, is not that type of person.

It would seem like a fools' errand "in the current environment," as his friends and former colleagues tell him. Hank knows there's a million other things he could be doing. "But this is what I do," Hank reflects on what drives him to continue working as a detective. "It's what makes sense to me, what has long made sense. And surely some large proportion of the world's current danger and decline is not inevitable but rather the result of people scrambling fearfully away from the things that have long made sense."

So Hank takes on the case, enlisting the help of his sister, Nico, who has joined a rebel group that believes there is a government conspiracy to stop a feasible effort to deflect the asteroid and save the world. Hank thinks she's crazy but she has contacts in the Free Republic of New Hampshire, a utopian student community set up in the former university, and his search for the missing husband leads there.

The description of this community and one of its leaders -- who is determined to prevent the free republic from descending to the inevitable bloody authoritarianism of Jacobin revolution by quietly exercising her own version of authoritarianism -- is an ingenious portrayal of a world that is part postapocalyptic and part satire. The individual characters are vividly sketched and a wry humor underlies Hank's narrative.

His search takes him to the Maine coast -- bicycle is the main form of transportation -- where he discovers that coastal defense efforts to keep immigrants from landing are more cynical than he imagined. Again, the real-life issues we face in the Caribbean and Mediterranean are only thinly veiled in this science fiction plot.

By the time Hank makes it back to Concord, the breakdown of law and order is nearly complete. He has successfully unraveled the mystery of the missing husband but his report is disappointing to his "client," and in any case the whole world is literally going to hell in a handbasket. The CPD has made its own preparations for survival as the forces pull out of town and leave the residents to their own devices.

Winters apparently has people contribute ideas of what they would do in this situation to his website, and perhaps that is the source of some of the entertaining detail in the various reactions of people to the coming catastrophe. It will be interesting to see how he wraps it up in the third volume, if that is indeed what he does.

The writing is compelling, the protagonist sympathetic, the far-fetched plot surprisingly realistic -- a great series.
Posted by Darrell Delamaide at 1:24 PM