The Taint of Midas 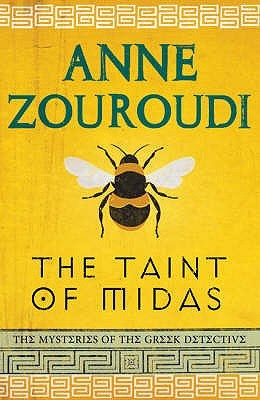 Anne Zouroudi evokes the sight, smell and sounds of Greece in a language that is clear and crisp. Her descriptions of everyday life and the pain of the corrosive effects of tourism and commercialism (this in 2008 even before the current crisis) transport the reader to the country's cafes and scenic roads.

But her feeble mystery tracing the driver of a hit-and-run death amidst a developer's scheme to build luxury villas on a protected mountainside is thin and unsatisfying. Her "detective," Hermes Diaktronos, may be less opaque to readers of her first novel, but he remains a complete cipher in this book. There is virtually no interior life for this character and the author's insistence in referring to him always as "the fat man" is awkward and distracting. The sketchy details of his appearance bring to mind the young Peter Ustinov of "Topkapi," but that is doing the author a favor.

The villain of the piece, Aris Paliakis, emerges as the better drawn character, and even the two police officers involved show more personality than the fat man. There is not much mystery in this short tale of greed and corruption, and the fat man's elliptical search for clues borders on fantasy as he all-knowingly intervenes in the lives of those he has decided are the perpetrators of his friend's death or in some other way contravene his understanding of justice. This virtuous vigilante even straightens out the police department while he is at it.

The minor characters go some way to redeeming the novel. The opening chapter depicting the aging Gabrilis Kaloyeros as he harvests his watermelons to sell at his stall in town, or another episode with the barber Sosti who closes his shop to go fishing after 12 haircuts no matter what time it is are well drawn. Some of the vignettes -- how Paliakis dupes the tourists dining in his restaurant or tries to sway town council members to approve his planned development -- are amusing.

I bought this as a remainder and it may be Zouroudi never finished what seems from the subtitle -- "A Seven Deadly Sins Mystery" -- to be a projected series. If she did, perhaps the character of Diaktronos eventually takes on some depth. Unfortunately, even though the writing really is good, this story just barely works as a standalone novel.
Posted by Darrell Delamaide at 2:36 PM