Three author friends of mine are about to see years of work crowned with publication of their books early in the new year. They are all serious books, scheduled for publication after the holiday season, and I’m looking forward to reading them. I’m very happy for my friends, who have worked very hard on these books and wish them every success.

Water: The Epic Struggle For Wealth, Power, And Civilization by Steven Solomon is due out in early January. It’s certainly been an epic task for Steve to boil down, no pun intended, the history and politics of so essential an element as water to a manageable length.

Steve found a working structure and dove into the task (don’t know why these water images come to mind) with immense energy. He wants the book to help frame the discussion of what is sure to be one of the globe’s biggest issues in the coming decades, much as Daniel Yergin’s book about oil, The Prize, helped establish the policy discourse about that resource.

Steve’s forte prior to taking on this project was business and finance, and his 1995 book on central bankers gains new relevance in light of the current financial crisis. He has a tremendous analytical capacity and a deft journalistic style that is sure to bring this subject to a wide audience.

Pulitzer: A Life in Politics, Print, and Power by James McGrath Morris is due out Feb. 9. Jamie has put in hundreds of hours and thousands of miles in tracking down new source material for this biography.

Jamie came to Pulitzer after writing a biography of a New York World editor Charles Chapin in The Rose Man of Sing Sing (still in print!). He has devoted himself full-time to bringing out the first full biography in a generation of one of the most famous men in American journalism.

He worked and re-worked the text with his editor to get a book that is both authoritative as a biography and readable for what is likely to be a wide audience familiar with the name from journalism’s most distinguished prize.

What a story! Born in Hungary, Pulitzer arrived in this country not speaking a word of English to go on to become one of the greatest press barons in our history. But in his success, he became an obsessive and isolated Howard Hughes-like character, virtually blind and sailing the world in his yacht to avoid noise.

Jamie is a born biographer, who relishes the small, telling details that bring people to life. He is enthusiastic about life and loves his work, and that is bound to infuse this book with a compelling vivacity. 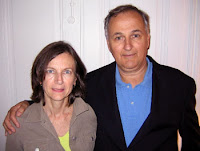 Keeping The Feast: One Couple's Story Of Love, Food, And Healing In Italy by Paula Butturini is scheduled for publication Feb. 18. This memoir is certain to break readers’ hearts as Paula relates the sorrows and joys of what she and her husband, John Tagliabue, have gone through since he was shot covering the 1989 Romanian revolution for the New York Times.

John has written about his subsequent depression in the Times magazine in a searing, personal narrative. Paula puts it in the context of their life together in Rome, dealing with the effects of his illness and yet creating an environment of warmth and happiness for themselves and their daughter.

I haven’t unfortunately had the chance to visit them for years, but I know firsthand the kind of warmth they can create over a bowl of polenta or pasta from a very happy visit with them in Rome at Christmas time some years ago, or from the Thanksgiving dinner in Berlin where I first met them, before John’s terrifying experience in Romania, but in the aftermath of another family tragedy.

Paula is a journalist who has covered everything from revolutions to the Vatican, and has written a number of engaging travel pieces for the Times over the years. But I’m sure what will give the book its wide appeal is her strength of spirit and her incredibly human warmth, which is a balm for anyone fortunate enough to cross her path.
Posted by Darrell Delamaide at 2:42 PM