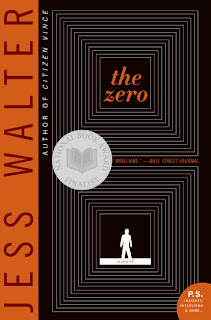 This book by Jess Walter, a finalist for the National Book Award in 2006, is a bit like Don DeLillo meets John Le Carré meets T. Coraghessan Boyle. DeLillo's influence -- White Noise, Libra, even The Names -- dominates but there is also an original voice, the same that I encountered and liked in Citizen Vince. Walter's narrators are intelligent and empathetic. The books are sophisticated and postmodern but nonetheless compelling in the fluency of the prose, the satirical humor and the genuine emotion they portray.

The narrator in The Zero, Brian Remy, has gaps in his memory, so his narration careens from a Memento-like absence to a Being There type of simplicity.

This is a story of 9/11, or as Walter says in the interview included in my paperback edition, a story of 9/12. The author plays on all our shared images of that specific tragedy, while universalizing it by avoiding any specific references to the World Trade Towers or Ground Zero, which becomes simply The Zero. The president and the mayor (The Boss) remain nameless. The plot is complex, rendered more so by the memory gaps the reader shares with Remy, but handled with such grace by the author that you can actually follow it. Some of Remy's observations are mordantly funny, and some of the secondary characters, such as Remy's old partner Gutarek or his new colleague Markham, are wickedly satirical.

While the paranoiac and reactionary behavior of the government in the wake of 9/11 is the mainspring of the plot, the emotional punch comes from Remy's dazed and confused perspective in the wake of 9/11, his tenuous connection to what is left of reality, his suspected complicity in abandoning the ideals we are supposed to be defending. The book is cynical, but Remy remains an idealist -- an unhappy and ultimately defeated idealist.

I liked Citizen Vince and loved The Zero. I had bought the latter when it came out in paperback and had it sitting on my shelf for a couple of years. Of the three "9/11 books" I've read recently -- see my posts on Netherland and The Relucant Fundamentalist -- this is for me the one that really begins to plumb the depths of what it means. I went to a reading of Don DeLillo's at the Barnes & Noble at Union Square many years ago and asked him during the Q&A session why he wrote Libra. He said the real question is why did they shoot Kennedy. An author's task, he said, is to examine and render society's traumas, as DeLillo did with Libra and Walter does in this book.

I was in New York at Ground Zero shortly after 9/11 and so many of Walter's descriptions here capture the poignancy of the moment so well (Walter was working on assignment in New York at the time and saw much of the aftermath firsthand). His character laments at one point that by bulldozing away all the rubble the authorities robbed the battleground of its meaning and turned it into another hole in the ground. The subsequent controversy over the what to do with Ground Zero shows the truth of that.

Walter has since written The Financial Lives of the Poets, which seems intriguing, and has two earlier detective-type novels set in his home town of Spokane. Janet Maslin wrote of Walter in a New York Times Review that he was a "ridiculously talented writer" -- a blurb-writer's dream, but in this case an accurate description. I've gone from being a fan to being a devoted fan, and look forward to reading his other books.
Posted by Darrell Delamaide at 9:10 AM