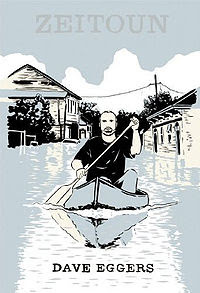 Abdulrahman Zeitoun is a Syrian American who was falsely imprisoned in New Orleans in the wake of Hurricane Katrina. But Dave Eggers' narrative nonfiction is not about a confrontation between the U.S. and Islam after 9/11. It is a book about what a colossal f---up the rescue efforts were. It is above all a very personal story about how one man reacted to danger and responsibility and how that affected his family.

Zeitoun was arrested in flooded New Orleans on suspicion of looting. He was arrested along with another Syrian American and two white Americans. Under the circumstances, the arrest itself was not a grievous miscarriage of justice. The subsequent treatment of all four men and the violation of their civil rights was.

Zeitoun is released on bail after 20 days. He did not eat or sleep well during his captivity, so he lost 20 pounds and looked a good deal older. His family, worried literally sick because he had no opportunity to call them, and especially his wife, were traumatized.

But the others arrested with Zeitoun on the same flimsy evidence were held much longer -- six to eight months. We are not even sure from Eggers' account if one or the other of them wasn't actually guilty of looting.

Zeitoun himself, whom the reader comes to know fairly well, castigated himself for his "hubris" in staying in New Orleans because deep down he wanted to emulate the heroism of his older brother, a champion swimmer who was prematurely killed in a car accident in the full blossom of youth. Even if he was justified in staying through the storm to take care of his house, his business and his rental properties, and even if he was able to help rescue stranded people in the first days of flooding, he owed it to his family, he felt in retrospect, to have availed himself of emergency evacuation possibilities as the crisis dragged on.

He didn't evacuate and although he evaded encounters with armed gangs he was in suspicious enough circumstances to get arrested. He was together with the other three men in his rental property, where the landline phone still worked, with a blue and white motorboat that had been seen in a looting incident and electronic equipment piled on the dining room table to save it from the flood waters. It didn't help that two of the men arrested had large amounts of cash with them.

The narrative of Camp Greyhound and the Hunt prison is riveting and dramatic. In some ways it overshadows some equally interesting narratives. The back story of Zeitoun growing up in Syria and roving at sea for 10 years before settling in Louisiana and courting his wife, Kathy, a young divorcee and convert to Islam.

The narrative of Katrina and its aftermath was for me the most gripping. Like a good catastrophe film, the book eases into the event showing people going about their lives as usual, as radio bulletins of increasing seriousness warn of Katrina's approach. Zeitoun's family evacuated and he remains in his home, placing buckets to catch leaks as the storm blows over. He uses his secondhand canoe to silently paddle through flooded neighborhoods, hearing cries for help and summoning rescue teams for an elderly couple, a disabled woman and others. He hears dogs trapped in a couple of houses and finds a way to feed them, returning every day to give them food and water. He visits his rental properties, his mosque, he pitches a tent on the flat roof of his garage to escape the heat and odor of the house.

Zeitoun is a resourceful, honest man that you cannot help but admire. Whatever his motivation, he responds generously and courageously to the unexpected crisis resulting from the storm. Perhaps it would have been wiser to evacuate, but it was hardly hubris to stay. He could not anticipate the grief that would come to his family when his arrest made him suddenly incommunicado. One tie keeping him in the city was the need to feed those dogs, who in the end died of starvation during his captivity, a note of true pathos.

Eggers tells the story resolutely from the point of view of Abdul and Kathy Zeitoun. We are asked to swallow without comment Kathy's feeling of "liberation" as a woman in Islam, even though we know that women in Islam do not enjoy anything like what we would consider equality or freedom. The generosity and caring of the Muslims in the narrative are contrasted with the callousness of the non-Muslims, including Kathy's own family. It is all true, but of course it is not the whole story.

The book is what is now called narrative nonfiction. Dialogue is fabricated on the basis of recalled conversations. Interior monologues are based on long interviews with the subjects. There are touching family photos. In his earlier book, A Heartbreaking Work of Staggering Genius, Eggers, by his own account, compressed incidents and timeframes. Since he makes no mention of it here, he presumably is not doing it in this book. In any case, the book reads like a good novel. It takes us inside characters, it transports us into a dramatic situation, it moves to a climax and it leaves us transformed in some small way.

While Eggers' earlier book, which I have not read, was a type of memoir, this is more journalism the way Tom Wolfe envisioned it in The Right Stuff and his other early works. The writing is elegant but not showy, letting the story grip the reader directly. It is artful, but the art achieves a transparency like that described by Roland Barthes in The Degree Zero of Writing -- the language does not refract or distort the meaning but conveys it with great lucidity.

Zeitoun reduces the drama and catastrophe of Katrina to a personal story that each of us can relate to. It gives the freefloating outrage that all of us instinctively feel about the criminal incompetence of the rescue efforts a focus on a genuine injustice and real harm to a family. It shows us that just because the Zeitouns, like so many others in New Orleans, are able to move on, damaged but resourceful and hopeful, does not remove the injustice that was done. Probably few will ever pay for the crimes committed, but that is no reason to forget the misdeeds and no reason not to punish those we can.
Posted by Darrell Delamaide at 5:29 AM