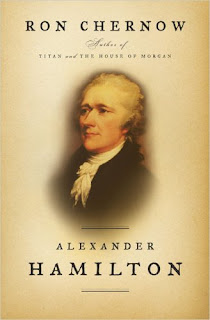 Can the biography of an 18th-century American statesman be a monetary policy tool in 21st-century Europe?

According to a recent report by Wall Street Journal reporter Jon Hilsenrath, the president of the European Central Bank, Jean-Claude Trichet, has been reading Ron Chernow's biography of the Founding Father who met a premature death in a duel with Aaron Burr. Trichet, according to the report, is especially interested in how Hamilton achieved an historic compromise to have the nascent federal government assume the debt of the states and enable the new nation to move ahead economically. Trichet, of course, is on the firing line as the European Union tries to deal with fiscal difficulties in some of the weaker countries belonging to the joint currency, the euro.

The report prompted me to take the 2004 book off my shelf and start reading it. I've always been a fan of Ron Chernow -- who previously wrote biographies of J.P. Morgan and John D. Rockefeller among others -- and fascinated by Hamilton. The 818-page biography is a long-term project, but I want to read more nonfiction anyway and this seems like a great place to start. Chernow has a gift for making his biographies both magisterial in their authority and compellingly readable -- once again confirmed in the early pages of his Alexander Hamilton.

Not sure when I'll get to the chapter about the federal government assuming states' debts. Who knows, maybe it would be a useful historical precedent for the early 21st-century United States as well as for Europe. In any case, I hope to finish this book sometime before David Stewart's biography of Aaron Burr, American Emperor, comes out in October!
Posted by Darrell Delamaide at 9:04 AM