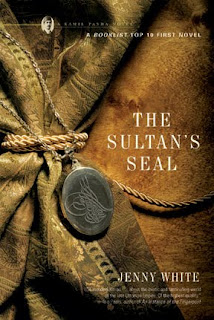 Jenny White's well-written novel set in the waning Ottoman empire falls somewhat short of its literary ambitions but is a worthwhile read nonetheless.

She attempts not one but four literary artifices that I generally don't care for. The main narrative is in the present tense; hard to do, not sure why anyone tries. She shifts from third-person narrative to first-person narrative (in past tense); always jarring. She intersperses that with yet another first-person, epistolary narrative. All this makes a woman writing about a male character the least of her offenses.

While the writing itself is of a very high quality, all this jumping around makes the narrative jerky and sometimes confusing.

I read this to sample another Ottoman murder mystery written by someone besides Jason Goodwin in preparation for reviewing Goodwin's new novel for Washington Independent Review of Books. While Goodwin's Yashim is set in the 1830s, White's Kamil Pasha is set in the 1880s. The half-century time difference permits Goodwin to keep much more of the Oriental exoticism. Yashim dresses in robes and turban, while Kamil wears a coat and fez. Goodwin manages some scenes in Topkapi palace while White must move on the newer, less exotic palaces.

Both writers, however, glory in the charm of Istanbul and the wonders of the Ottoman culture. White's language is even more elegant and powerful in rendering this other time and place.

But I have some other criticisms of this book. Kamil Pasha, unlike Yashim, is not a eunuch, and yet is not particularly virile or convincing as a male character. This book dwells far too long on an incipient romance between Kamil and the daughter of the English ambassador in ways that neither move the plot along or really give us more depth of character. As a result, important allies or would-be allies of magistrate Kamil, the police surgeon and the daughter's American cousin, get short shrift and are never satisfactorily developed for the roles they play. The overlapping, jumbled narratives leave us wondering about motivation, and at the end of the book it's fair to say the reader is not really sure who killed whom or why.

White has since produced two more Kamil Pasha novels and presumably has overcome some of these first-novel jitters. If I do go on to read the subsequent novels, though, it will be for her lyrical descriptions of this period rather than any love for Kamil Pasha.
Posted by Darrell Delamaide at 1:06 PM