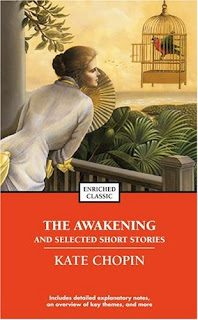 The John Goodman character in "Treme," a university professor despairing at the irreparable damage Katrina has done to the delicate web of New Orleans culture, talks at some length in a classroom scene about Kate Chopin's novel, emphasizing, if memory serves me, the impact of The Awakening on contemporary readers.

The novel's theme of an individual woman's, or person's, "awakening" and self-realization are timeless. That its consequences in terms of her behavior were scandalous at the turn of the 20th century is interesting for the student of literature, but for us simple readers it is really more a question of how Edna Pontellier's change in attitude made it, in the end, impossible for her to live in the bourgeois society of New Orleans' upper class.

I had gathered from the Goodman character's remarks in Treme that she was ostracized from society for her behavior, but it never comes to that. Her departure is more final, and precedes a full-blown scandal.

Even with this dark, brooding side, the novel is completely charming for the contemporary reader. The view of an exotic Creole society -- apparently Chopin's stock in trade for her contemporary readers -- is as enchanting now as then, perhaps more so because it has truly vanished.

The vivid and lovely descriptions of summer on the Grand Isle and much of the life back in the city do transport the reader to another time and place. The author exploits her lush setting to the hilt: "She went and stood at an open window and looked out upon the deep tangle of the garden below. All the mystery and witchery of the night seemed to have gathered there amid the perfumes and the dusky and tortuous outlines of flowers and foliage."

The view of Edna's inner life, the struggle there, are lyrically described: "There were days when she was very happy without knowing why. She was happy to be alive and breathing, when her whole being seemed to be one with the sunlight, the color, the odors, the luxuriant warmth of some perfect Southern day. She liked then to wander alone into strange and unfamiliar places. She discovered many a sunny, sleepy corner, fashioned to dream in. And she found it good to dream and to be alone and unmolested."

Edna's husband is cold and detached, but not unsympathetic. When Edna, in an early sign of rebellion, refuses to come to bed but remains outside one evening, he plants himself possessively near her and smokes cigars until the chill drives her in. When she takes advantage of his extended business trip to move out of their house into a place of her own nearby, he immediately sends workmen into the abandoned house to begin a major renovation that offers an explanation for her move that avoids scandal.

Edna's would-be lovers, Robert and Alcee, are young and callow. Her women friends reflect each one the complex motives roiling her soul -- except none betray the passion that Edna feels rising in her.

A wry humor and gentle irony also ripple through the narrative. Mademoiselle Reisz, a spinster pianist with an enigmatic connection to Edna, is also a figure of fun with a bouquet of violets in her hair and a pile of cushions on her dinner seat.

Edna's yearning for freedom is poignant. Other characters point out its childish and selfish nature, but that makes Edna no less sympathetic to the reader. And so her trip back out to Grand Isle and her long swim in the Gulf are immeasurably sad.
Posted by Darrell Delamaide at 1:45 PM