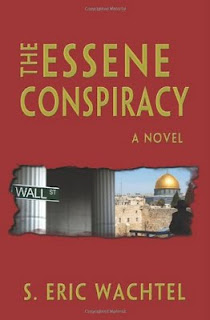 This thriller by S. Eric Wachtel is part of my new effort to read self-published e-books as I prepare to self-publish my own book. I read and recently reviewed Jim Bruno's excellent Tribe.

I'll confess I spotted this book, evidently a print on demand copy in the thriller section of Politics & Prose and simply did not want to take a chance spending $14.99 on an author I knew nothing about. Even so, the $9.99 price tag on the Kindle version was relatively high.

The novel starts with a lot of promise -- the mysterious murder of the Israeli finance minister, a sympathetic American "security consultant," and a plot that eventually involves the Essenes (as in Dead Sea Scrolls), the Ark of the Covenant (as in Raiders of the Lost Ark), and that chapel in Rosslyn, Scotland (as in Da Vinci Code).

Unfortunately, the book failed to fulfill its early promise and broke down seriously as it moved to a climax that lacked any action or suspense. The author spends a page in the final chapters showing us a statue in the Justice Department and then tells us about a firefight to wrap up the conspiracy in two sentences.

Author Wachtel evidently worked in finance and the money-laundering scheme that launched the plot is well told. Likewise, the scenes in Jerusalem and Tel Aviv, the descriptions of Israeli officialdom show glimmerings of real potential. But the putative hero, Harry McClure fades into the background as the plot progresses and spends virtually all of his time showing off his cigars, his office, his single malt Scotch, his country house (we get it, we get it -- he's rich and knows how to live well, whoopee). The most active he gets is clipping off the end of cigar and pouring a drink. Wachtel's author bio says he's working on another Harry McClure plot, so I hope he figures out how to get a little action into the narrative.

The principal villains also show considerable promise at the beginning. Mayer Rubin becomes a Hasidic Jew, spends time in Israel, and is infected with the idealism of the Essene conspiracy, which aims to rid Temple Mount of its Muslim sacred buildings, rebuild Herod's Temple and restore the Ark of the Covenant to it, establishing a theocracy in Israel. The author develops a lengthy back story for Rubin, but then, as he does with McClure, just drops him and shifts to a new set of characters that are never fleshed out.

This book would have benefited enormously from a good editor. Wachtel is evidently not a practiced writer, but equally evidently he has some talent for it. He simply failed to follow through, lapsed into telling instead of showing, got way to caught up in details (people are always saying goodbye when they don't need to), and numerous other mistakes of a first-time and untutored writer.

So we see that the limits of self-publishing are quickly reached. This could have been, if not a good book, at least a much better book with some help. Wachtel will have an opportunity in subsequent efforts to improve and presumably will.

In any case, I'm a sucker for thrillers that involve Essenes, early Christianity, Templars and all those esoteric things that by now constitute a real sub-genre. So even with its flaws, I enjoyed reading this.
Posted by Darrell Delamaide at 4:25 PM