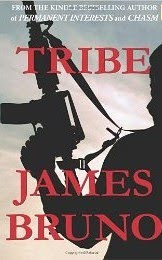 James Bruno’s riveting tale of skulduggery in the CIA and Central Asia is a page-turner par excellence. Or, if you’re downloading the latest e-book from this Kindle bestselling author, a page-scroller sans pareil.

Bruno shifts the rollercoaster action of his latest spy thriller effortlessly from the Khyber Pass to the Old Executive Office Building to the “Wild East” of Yemen and the reader just needs to hold on for dear life.

Tribe’s story of a conspiracy to have the U.S. government hand back control of Afghanistan to the Taliban in exchange for American oil companies getting to divvy up the riches of the Caspian Sea is Realpolitik at its most real. Bruno, author of Permanent Interests and Chasm, brings his trademark insider’s knowledge of government intelligence agencies together with a narrative skill that rivals anything David Ignatius has written, and does him one better in conveying the curious blend of bravura and bureaucracy that characterizes the CIA.

Bruno adds his own mordant wit and deeply professional cynicism to the mix to create a potboiler that has everything – action, suspense, sex, humor, and, in an American take on John Le Carré’s gray world of espionage, a meditation on the bigger issues of trust and betrayal and how to find room for patriotism or integrity in a world of runaway egos and ambition.

The hero of Tribe is Harry Brennan, who in attitude and magnetism could be portrayed on the screen by Clint Eastwood in his prime (the author even toys with the reader and mentions Eastwood in describing his character). This Harry is dirty as well, as he is not always successful in resisting the seductions – of power, sex, and revenge – that are thrown his way. He acknowledges his failings, but does not lose sight of which side he wants to come down on.

While Tribe begins with an attack on an al-Qaeda camp in Afghanistan and climaxes with a thrilling hostage rescue in Yemen, most of the action in between takes place in the tony townhouses of Georgetown or the equestrian estates of Virginia where Washington’s movers and shakers ply their trade. It is tempting at some points to figure out if Bruno has mounted an elaborate roman a clef, but in the end it isn’t necessary because the author’s vivid characters stand on their own.

The action in exotic locales like Central Asia and the Arabian Peninsula has an eyewitness feel to it. But it is ultimately the layers of intrigue within the U.S. government – and the Establishment that governs behind the façade of our democratic institutions – that packs the real punch in this novel. Bruno skillfully and authoritatively peels back the cant and hypocrisy of the ruling class, and mercilessly exposes the greed and venality that motivates so much of what happens in Washington.

Tribe, we realize as this thriller reaches its climax and denouement, is about loyalty, and that is not a quality confined to Afghani or Yemeni clans that Harry Brennan gets involved with. It refers as well to the primordial ties of family and friendship, of camaraderie and shared values that manage to survive the ravages of our putative civilization. Harry, in the end, is faithful to his tribe.

Bruno is in the vanguard of those talented authors who are exploiting the rapidly expanding digital medium for books. He has found his audience in the burgeoning e-book market and gained a loyal following. Because he can deliver the goods in authenticity and a lucid prose style, Bruno is proof that the post-publishing house world can produce suspense novels on a par with the franchise names on the print bestseller lists.
Posted by Darrell Delamaide at 7:54 PM