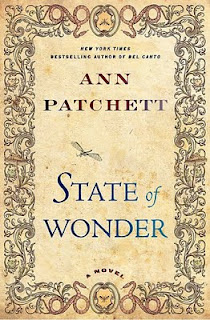 This captivating novel by Ann Patchett defies categorization. She has passages as humorous as anything Jess Walter or T. Coraghessan Boyle have written, while her story of scientists finding wondrous drugs in the Amazon borders on science fiction.

It is first and foremost her writing that compels the reader. The narrative is consistently fresh, the descriptions novel and flashes of insight make her prose sparkling.

When the news of a colleague's death in the Amazon comes to Marina Singh via a short message in a blue Aerogram (they still exist!), she's amazed that Annick Swenson, the eccentric researcher who sent it, finds so little to say about a man who left behind a wife and three small boys. "For all that loss Dr. Swenson had managed to use just over half the sheet of paper, and in the half a sheet she used she had twice thought to mention the weather. The rest of it simply sat there, a great blue sea of emptiness. How much could have been said in those remaining inches, how much explained, was beyond scientific measure."

Marina makes the trip from wintry Minnesota to tropical Manaus and from there into the Amazonian rain forest to fill in that blank half page, and the reader follows her from the mundane and familiar to the exotic to the fantastical as she finally reaches the Lakashi tribe where women are able to have babies into their 70s. Marina's company, Vogel Pharmaceutical, is trying to find out how so they can patent it and sell it. That's what Dr. Swenson is researching and why Marina's lost colleague, Anders Eckman, is sent to find out what progress is being made.

Patchett peels back the layers of Marina's past, creating a complex and sympathetic character who is, one feels much of the time, unaccountably passive, a person bounced around by the things that happen to her rather than ever in any sense in control of them. In the end, you get the glimmering of an impression that there are certain values which steer her in one direction or another, that she is acquiescing in principle to the things that happen to her. She seems to me to be a weak character, thrown into the shadows when anyone else is with her -- the quirky, driven Dr. Swenson; the "bohemian" Bovenders; the ambivalent boss, Mr. Fox; Eckman's wife, Karen; Eckman himself in flashbacks; Milton, the driver and fixer in Manaus; even Easter, the deaf-mute boy from a neighboring tribe.

Are there other messages here -- about the role of women in society, about pharmaceutical research, about integrity? Yes, but they are quietly woven into the narrative and not hammered into the reader. And there is the vivid, humorous description of northern Brazil -- its heat, its insects, its wildlife.

Patchett toys with the reader when the Bovenders mention they have Werner Herzog's film Fitzcarraldo to watch and then go to the opera house that inspired the Klaus Kinski character to build a theater in the jungle.

Patchett closes the dramatic circle without tying everything up in a neat bundle. It's not the type of book for a sequel but the reader can imagine a continuation of the story. We suspect that Marina has changed in a profound way but we don't follow her way in the world any further. She will presumably be less passive.

I never read Bel Canto but I'm a Patchett fan now and will go back to it.
Posted by Darrell Delamaide at 10:35 AM