A Cold Day in Paradise 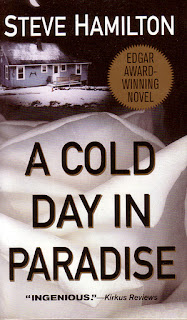 Steve Hamilton's debut novel won both the Edgar and Shamus awards for first novel, and it is indeed very good. The writing is crisp, the voice fresh, the first-person main character, Alex McKnight, is well-drawn, able but flawed and mostly sympathetic.

And it is certainly a page-turner. After about the first third, you will want to finish the book at a single sitting because the author paces the suspense well.

But it is a first novel and not perfect. There are some big holes in the plot. The most gaping in my eyes, without giving too much away, is that when one of the characters who is a possible target of a serial killer goes missing, our able hero searches for him instead of immediately calling the police, who are already aware of the danger and taking precautions.

It is virtually impossible, given all the mystery and detective stories out there, to come up with an original back story for a new hero. Alex McKnight, however, checks a few too many of the usual boxes -- ex-cop turned PI, wounded in action, partner killed, retreats to rural setting, etc. It's not a bad formula, but it is a formula.

The other characters are not fleshed out that well, with the exception of Chief Maven of the local police department, who is an intriguing character though perhaps a bit too much like Rod Steiger in "In the Heat of the Night." Some characters seem to be belabored -- like Alex's love interest, Sylvia -- while others come up short, such as Alex's friend Edwin or his lawyer employer, Lane Uttley.

This is my first book in the 50-state mystery challenge. Its setting in Michigan's Upper Peninsula is very appealing to me, and shares a lot with the bleak landscapes of the Nordic mysteries. Particularly the brooding presence of Lake Superior adds a dimension to the novel. The wind whipping around, the biting rain, the whitecaps on a stormy lake -- great atmosphere!

Funny that Hamilton would set his mystery in a Michigan town named Paradise in the same way Robert S. Parker picks Paradise, Massachusetts for Jesse Stone's refuge. The difference is that there really is a town of that name in the Upper Peninsula, whereas Parker's fictional Paradise is reportedly based on a town called Marblehead. In both cases, though, the authors certainly enjoy getting Paradise into the title.
Posted by Darrell Delamaide at 10:08 AM