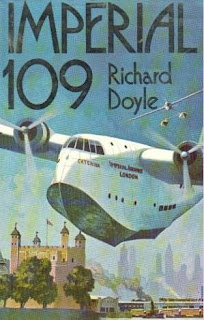 I've tried setting up versions of this list on Amazon and Goodreads and not gotten much traction with it. But I don't think it's because there's no interest in this sub-genre.

For me, the 20th century prior to the outbreak of World War II is already an exotic period. It is recognizably our modern world, but in some ways a more civilized version of it. It is in any case a time when real adventure -- not our leisure-time adventure excursions -- was still possible. The world was knit together but still had lots of open spaces. These are thrillers set in that period. They are not in any rank order. I'm just including one work per author, though generally many of their other works also fit into this category.

Obviously I want to include my own historical thriller in this list. I think it helps to provide a context for potential readers. If you like any of the books on this list, you will like The Grand Mirage.

I'll update with further additions. Please comment if you have a title to add, or any other comment.

1. Stamboul Train by Graham Greene
The master's take on the Orient Express.

2. The Grand Mirage by Darrell Delamaide
Adventure and intrigue on a caravan to Baghdad.

3. A Coffin for Dimitrios by Eric Ambler
A pioneer in the political thriller.

4. Night Soldiers by Alan Furst
Period atmosphere at its best.

5. Zoo Station by David Downing
Berlin between the wars.

6. Berlin Noir by Philip Kerr
Even grittier Berlin between the wars.

7. River of Darkness by Rennie Airth
A damaged World War I veteran investigates a gruesome murder.

8. Greenmantle by John Buchan
Date classic in the genre.

9. Riddle of the Sands by Erskine Childers
Still spellbinding tale of espionage in the North Sea tidal basin.

10. Pascali's Island by Barry Unsworth
Searing tale of one of the sultan's spies.

11. Imperial 109 by Richard Doyle
A whole book on the Pan Am clipper.

12. Ashenden, or The British Agent by W. Somerset Maugham
Spy story based on writer's own experience.
Posted by Darrell Delamaide at 12:44 PM