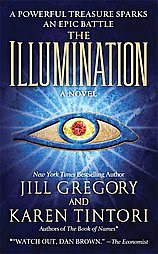 This thriller by Jill Gregory and Karen Tintori has two Americans attempting to safeguard a relic of the primordial light of creation, keeping it out of the hands of various malefactors and delivering it to the Israeli Antiquities Authority. The authors keep a fast pace as diverse villains -- an Iranian fanatic with the evil eye, a Florida cult leader with ambitions to rebuild the Temple in Jerusalem, a super-secret government agency, and an arch-conservative Jewish terrorist organization -- all seek to get the powerful relic for their own ends.

Museum curator Natalie Landau, aided by a new-found ally in the person of a former television journalist and occasional CIA asset, is the one trying to keep the object out of their hands. After some narrow escapes in New York, she and her ally, D'Amato, experience some more narrow escapes in Rome and jet to Jerusalem for the climactic action.

Natalie is a sympathetic and self-reliant protagonist, displaying a phenomenal ability to fend off brutish male attackers through her mastery of martial arts. In fairness, though, accepting Natalie's feats requires no more suspension of disbelief than for your typical male protagonist in action thrillers.

The authors are quite good at unveiling and developing the esoteric secret of the Eye of Dawn and linking it to the widespread belief in the evil eye. In fact, you have a much better idea of the prevalence of this belief in the Middle East after reading this than you do after finishing Jason Goodwin's most recent thriller, An Evil Eye.

Most of the other characters lack any real dimension and at times seem derivative from The Da Vinci Code and other thrillers in this genre. But the pace is good, the writing is crisp and the sense of urgency is maintained through the end.
Posted by Darrell Delamaide at 8:06 PM