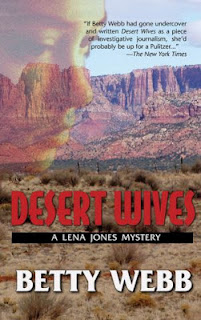 There is a murder mystery in Betty Webb's Desert Wives, but it takes a back seat to her harrowing portrayal of a polygamy compound on the Arizona-Utah border. The author's vivid descriptions of a primitive society outside the law, where women are treated primarily as breeding stock, make you feel like you've entered an alternative universe or a new circle of hell.

Lena Jones is a former cop/private eye based in Scottsdale, Ariz. Her client is a woman who has fled from the Purity polygamy compound operated by a fundamentalist offshoot of the Mormon church. Her former husband wants to marry off their 13-year-old daughter to one of the elders in the compound, who all seek to earn their place in heaven by taking as many wives and producing as many children as possible.

Lena manages to rescue the young Rebecca but the girl's mother, Lena's client, is charged with the murder of the compound's head, Prophet Solomon. To clear her, Lena has to investigate the murder and find the real killer (even though she is not sure her client is innocent). Through various connections, she finds an older man in the compound who has become disaffected with its whole ethos and embittered because he unwittingly signed over all his property and assets and would be virtually impoverished if he leaves. Saul is willing to bring Lena into the compound as his second wife to investigate the murder. She must wear the plain clothing of the compound's women and adopt their submissive attitude --  none of which comes easily to Lena, who is fiercely independent and wrestling with demons from her own childhood spent in foster care.

There are some truths that can only be told in fiction, and Webb's brutal descriptions of present-day polygamy are one of them. This is not Big Love, but it rings too true to be made up (and the author offers considerable documentation at the end of the novel to show it is based on fact).

Lena observes two-thirds of the way through the book that she has been in the compound more than a week and is no closer to finding out Solomon's killer. This may frustrate some mystery readers who want her to get on with it. But the portrayal of this universe is as compelling and suspenseful as any murder mystery, if not more so. In the end, victim and killer alike are caught up in a system that appears to be unalloyed evil. It combines some of the worst ills in society today -- unbridled greed hypocritically posing as religious fundamentalism, battering and abuse of women, and child molestation, among others.

That said, some of the description of life in the compound could probably have been sacrificed to move the plot along more quickly. Also, in terms of mystery plotting, the reader would have benefited from more clues. As it is, Lena's illumination about the identity of the killer seems abrupt and somewhat arbitrary. Lena herself seems at times less mature and less professional than one might expect from a veteran law enforcement officer, and some of the other characters remain two-dimensional.

Webb excels at evoking the desert landscape of the Arizona Strip, with its beauty and its danger. The flashes of scenic beauty, the genuine joy of many of the children living together in a closed community with fixed parameters lighten the gloom of compound, where most of the people live in sordid poverty while the "prophets" enjoy a life of luxury.

The reader is happy to leave Purity, but much sadder, if wiser, knowing that such places exist and are allowed to exist by a corrupt society.

Posted by Darrell Delamaide at 12:38 PM