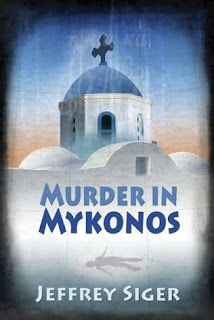 Jeffrey Siger's accomplished procedural delivers everything you want from a murder mystery -- a plot with lots of twists and mounting suspense, a protagonist who's not perfect but sympathetic, and a great sense of place. It helps that the place in this instance is a beautiful, exotic island in the Aegean. I found the vicarious trip to Greece so real that I broke out the ouzo for an aperitif and cooked up a lamb stew from my Greek cookbook.

Inspector Andreas Kaldis is sent to Mykonos to get him out of Athens, but instead of supervising drunk tourists and handing out parking tickets he stumbles upon what may be Greece's first ever serial killer. Obviously, having a killer on the loose who favors tall, blonde foreign women would not be great for tourism, the lifeblood not only of Mykonos but of all the islands. So there is considerable pressure on Kaldis  to track down the killer quickly, and to do so without notifying anyone he exists.

Siger not only enables you to see, taste and smell Mykonos, he is a master at whipping around veils of deception that tease the reader with false conclusions -- about the identity of the victims, the possible murder suspects and the motives of Kaldis's law enforcement allies. He also does an admirable job of building the suspense, so that by the last third of the book you are clicking away at the "next page" button almost faster than you can read.

I went to Mykonos many years ago, perhaps in the simpler, less frenetic time that Kaldis himself recalls. The crass tourism depicted here might repel some readers, though Siger, who apparently lives in Mykonos himself, clearly is taken with its natural beauty. I'm sure the off-season is wonderful. The author also shows great insight into the Greek character, as well as the assortment of expats, dissipates, and tourists you find in great resort areas.

Siger makes great use of the local scenery -- the little churches with rounded tops (that you will never view with the same eyes again!), the old mining tunnels that evidently crisscross the island, the beautiful beaches where a young tourist realizes she will be more conspicuous if she leaves on her bathing suit. The author is adept at shifting the point of view between Andreas, our intrepid detective, and, for long passages, Annika, the engaging Dutch woman who is likely to become the killer's next victim. Less successful, perhaps because the author wants to keep as many suspects as possible, are the times we view the action from the killer's point of view.

There are several suspects, and it's an object lesson in how suspicion bordering on paranoia can cast even ordinary, innocent actions in a bad light. In a final tease, the author reveals the identity of the killer only in the last paragraph, and this may be a tease too many. Readers appreciate a little anticlimax, time to think back to the clues along the way, perhaps a reprise of how normal the other suspects look now that they are in the clear.

Siger has written two further Andreas Kaldis mysteries in the meantime, which I look forward to reading. He is published by Poisoned Pen Press, which has become a model for how a small, independent press can flourish in the new world of digital publishing.

Posted by Darrell Delamaide at 8:01 AM