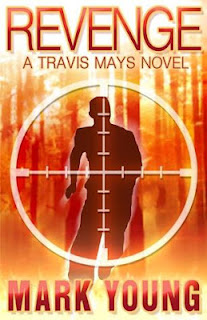 Mark Young situates his police procedural in the wilds of Idaho. He makes you smell and feel the outdoors and you wish you were there. His hero, Travis Mays, takes a whitewater kayak trip with his Indian guide, Jessie, and begins a romance and a mystery that takes us up and down the river and trails along Highway 12 in western Idaho.

Takes us a few too many times, really. The 350-page book could have been 70, if not 100, pages shorter. The action is at times needlessly duplicated or drawn out without adding anything to the plot or character development. Travis is well-drawn as a policeman who has a case go terribly wrong and who wants to retreat to his inaccessible cabin in the Idaho mountains and teach his courses at nearby Washington State University in Pullman, Washington. But Jessie is two-dimensional and comes across as a bit whiney, while her father, Frank, the tribal chief of police for the Nez Perce, is also a cliche who never really gets fleshed out.

Otherwise, there are too many characters doing too many superfluous things to make this successful as a suspense thriller. I enjoyed the scenery, the sense of place, but felt too often that I was plodding through. There are a couple of twists at the end, but one twist creating too many coincidences, and the unmasking of a villain who is introduced late but too obviously.

It's a good enough addition to my 50-state mystery challenge, but could have been much more satisfying with a little more judicious editing. Young has a good command of narrative and language; his action sequences work well. His years as an officer in the Santa Rosa police force give the book an authentic voice and feel. I can't quite get to four stars on this but I would want to give it more than three, so I won't post it elsewhere. There is much to emulate in writing a procedural and some other good lessons from the mistakes.
Posted by Darrell Delamaide at 12:21 PM