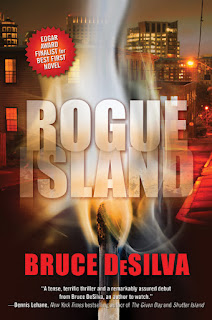 Bruce DeSilva has produced a well-written, well-edited but only mildly entertaining noir novel featuring a hero so obviously modeled on himself that it gets in the way of the story. The author succumbs to one of my pet peeves in these debut novels -- he inflicts his personal tastes and preferences on the reader in lieu of doing any genuine characterization.

DeSilva's author photo features him with a big stogie and his fictional hero Liam Mulligan distinguishes himself every few pages by "firing up" or "sparking up" a "cuban" with virtually everyone he talks to. In fact, it appears the secret to being a successful investigative reporter is to develop a cigar-smoker's network. Not that Mulligan is notably successful in his investigation although there are intimations of past glory (a 10-year-old Pulitzer gets a passing mention). We don't really know much about Mulligan in fact -- how old he is, what he looks like, or what he likes besides cigars and the Red Sox (and women) -- except that he never grew up.

Like most of the other characters in this book, Mulligan borders on caricature, and caricatures that are decades out of date. It's almost jarring when a cell phone is mentioned. The newsroom rivalries, the bookie, the strip joint are all pushed just a bit beyond the point where you want to suspend disbelief that people really talk and act like that.

But perhaps Providence, R.I. is really like that. We are told that DeSilva had a 41-year career as a newspaperman, so he must know. He does of course lament the decline and fall of newspapers and, after telling us what an irremediable mix of crime and corruption his hometown is, wants us to believe it will be worse off when the newspaper is gone.

As to the story itself: The plot about a serial arsonist torching buildings in a narrowly restricted neighborhood is fairly predictable. What little suspense there is tends to get lost in all the cigar-smoking, adolescent fumbling, and other childish antics of our ageless hero.

It's a little hard to understand how this book won the Edgar Award for Best First Novel. DeSilva makes it clear in his acknowledgments that he cultivated a dozen established crime fiction authors as he wrote the book, so perhaps that is part of the explanation. It tells you something about how literary awards get awarded.

For me, this novel is further evidence that self-published works can easily compete for readers' favor. Personally, I found Capriati's Blood  -- written by another veteran newspaperman, Lawrence DeMaria -- a much better read. It was leaner, more credible, less predictable and equally effective in conveying a sense of place (Staten Island in this case) as this Edgar Award winner from Tom Doherty's Forge imprint.


Posted by Darrell Delamaide at 9:25 AM