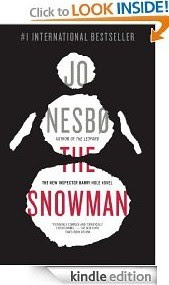 Jo Nesbo is a very good writer. His vivid descriptions, deft characterizations, and a prose that is clear and lucid even in translation all carry a reader along through a plot that seems to me overlong (512 pages in the paperback edition!), with too many twists and coincidences to really hold water.

The metaphor of the snowman is a brilliant focus for a police procedural in chilly Norway, and helps draw the reader along, too. However, while I understand why writers are drawn to serial killers -- it makes it easier really to impose a plot on an empty slate rather than have to deal with the triteness of conventional murders, it allows bodies to pile up -- it is for these very reasons something of a cop out.

My other problem with The Snowman and Nesbo is that I find his hero, Harry Hole, a bit hackneyed and ultimately somewhat tiresome. The loner detective, troubled by his demons, battling with alcoholism, unable to hold on to a woman has been a cliche for decades already. Hole (and was Nesbo really thinking about an English-speaking audience when he came up with this name?) brings a brooding Nordic twist to the formula, but it is still the same old formula. I can't imagine that I will want to go through another novel with poor old Harry.

But there's a lot to be said for good writing. And, as I've said before, I do like the Nordic venues. After visiting Oslo and Bergen, it's easy for me to picture the scenes in this novel, the distances in between. But for sheer adventure and novelty in northern climes, I found C.L. Withers Castle Cape more satisfying. His writing doesn't (yet) have the depth and texture of Nesbo's, but I found the Alaska thriller much harder to put down.

The Snowman was a bit exasperating in how elusive Hole found his villain. The character himself said you should focus on the least likely person as your suspect, and when I did that I got the right person much more quickly than Harry did. This is one of the reasons that I did put the book down fairly often and felt at times like I was plodding through.

One of the more amusing quirks of the Nesbo novels is his fascination with American presidents. Redbreast begins with Clinton's trip to Norway (who remembers that besides the Norwegians?). This book dates the action with radio reports of who is being elected or taking office in the White House. It is surely just a wry comment about how much attention the rest of the world pays to our politics, while we freely ignore whatever is going on elsewhere.

This book is better than Redbreast -- the plot is inherently more intriguing and the writing more sure-footed. In fact, I would imagine Nesbo has reached his peak. I would read another book of his if he moves away from Harry Hole, if reviews indicated it was written at this level. But goodbye Harry.


Posted by Darrell Delamaide at 9:15 AM