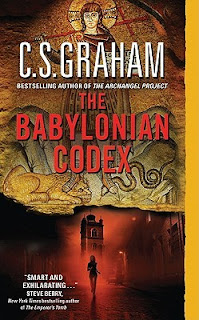 No sooner had I abandoned my attempt to re-read the old, yellowed copy of my Travis McGee book than I picked up a second thriller by C.S. Graham and was as captivated by it as I was by the first one I read, The Solomon Effect.

What these books have beyond good, solid writing and sympathetic characters is that they are witty and intelligent. Also, they are real travelogues and packed with the kind of arcane trivia that I personally like a lot.

There are realistic thrillers and less-realistic thrillers, and these books by the husband-and-wife writing team of Candice Proctor and Steven Harris fall into the latter category. Aside from the reliance on the paranormal phenomenon of remote viewing, they have plots which depart from real-life scenarios into the fantastic and even apocalyptic. But they are rooted enough in the world of fact that one is willing to suspend disbelief.

The historical details, like the descriptions of the various venues, come across as authoritative. Whether its descriptions of biblical texts or a scene in Marrakesh, the narrative rings true. If there is a meeting at the Jefferson Memorial, you are there, but if the characters are standing on an ancient mosaic in an obscure Spanish town, you are there, too.

And once again, the relationship between October Guinness and Jax Alexander is an entertaining and sympathetic one. So I read the book in just a couple of days. All that said, however, it was not quite as good as the first one I read, maybe just because it was the second one. The remote viewing, the characters, the writing were a little less fresh and original the second time around.

The plot, too, was somewhat formulaic, with many of the same elements as in the other book. Once again, a controlled remote viewing session launches the action, and is followed later in the book by a second session, on the run and less controlled. Once again, the bad guys include a number of high-ranking government officials with special ops crews that are remarkably and consistently inept when it comes to eliminating our heroes. Once again, there is a subplot involving an innocent third character who supplies the missing key that enables our heroes to follow through on their mission. Once again, Tobie and Jax crisscross oceans and countries following the twists and turns of the plot.

I'm curious to see if the same formula is followed in the first book of the series, The Archangel Project, or in whatever new book the authors come up with to continue the series.

One of the Amazon reviews complained about the "politics" of the book, and indeed the radical leftist view of the authors is more apparent in this book than in the other one. But since I have a lot of sympathy for this political viewpoint, it is one of the things I enjoy the most. And in this book, even though I have described the  notion of a biblical codex leading some right-wing nut jobs into transforming the U.S. into a theocracy as a fantastic and apocalyptic plot line, it is rooted in some disturbingly real facts. The authors' portrayal of "dominionists" in our military industrial complex is based on much actual documentation and makes Hillary Clinton's remark about a "vast right-wing conspiracy" seem like an understatement.
Posted by Darrell Delamaide at 9:53 AM