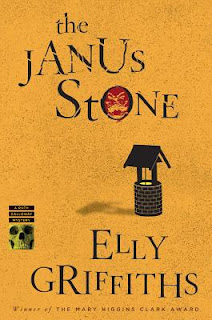 This quirky "archaeological cozy" by Elly Griffiths is an oddly compelling read. The second book featuring forensic archaeologist Ruth Galloway, it is very British and very female in a way that would not necessarily appeal to me. But I've had a soft spot for mysteries involving archaeology since Agatha Christie set some of her Hercule Poirot stories at the type of digs her husband worked on, so I picked this up when I saw it on a table at Politics & Prose.

The language is more pointedly British than in some other British writers I've been reading, perhaps because the setting and action are in such down-to-earth everyday situations. So there are plenty of references to lorries (trucks), boots (trunks), crisps (chips), torches (flashlights), and so on. In addition, the newly pregnant protagonist is quite focused on the growing child within her, the prospect of motherhood, the craziness of hormones, and so on.

The pace is not very fast and the plot, while neat, relies on a number of unlikely coincidences and a very high incidence of little girls dying mysteriously. Nonetheless, the author's voice, focused almost exclusively on Ruth's point of view, and the sympathetic main characters make the confection work. There is a droll undertone and gentle self-mockery to Ruth's character that are easy to identify with. The DCI on the case, as he was apparently in the first book of the series, The Crossing Places, is Harry Nelson, and his combination of gruff exterior and tender interior bring Albert Finney in his middle years to mind.

The story, set in the windswept marshes of Norfolk, involves the discovery during excavation of a Roman site of a young girl's skeleton in circumstances suggesting she might have been the victim of a pagan ritual sacrifice. The cast of characters, besides Ruth and Nelson, includes an archaeologist consultant, a part-time druid, various members of the local CID and assorted colleagues of Ruth's from the university, with a cameo appearance by her born-again parents, who strongly disapprove of her prospective single motherhood.

This little corner of Norfolk seems to have as much adultery as one of John Updike's suburbs. Sleeping with other people's spouses is the thing grown-ups do here (perhaps that's why it's called adultery). Ruth is pregnant after a one-night stand with Nelson (no spoiler, this is all in the opening pages), who is of course happily married to the beautiful Michelle and very fond of his two daughters. Ruth's best friend is apparently a scalp hunter currently sleeping with Ruth's department head, and futilely hoping he will leave his wife. Other sexual activity is intimated, but none of this interferes with the narration.

The story develops slowly and the pace only picks up in about the last fifth of the book. Some of the red herrings are belabored. The author can't decide whether to make Father Hennessy, the director of a children's home located at one time on the archaeological site, a sympathetic character or an ambivalent suspect. Also, for no apparent reason, she at one point throws in the totally extraneous fact the writes SJ after his name, only to observe that Ruth has no idea what it means. So the reference remains totally superfluous and even annoying, given that it's very unlikely a Jesuit would be director of a children's home. (One is left with the impression that Griffiths herself has no idea what SJ means.)

On balance, enjoyable, but no compelling reason to read the previous or the next book in the series.
Posted by Darrell Delamaide at 8:52 AM