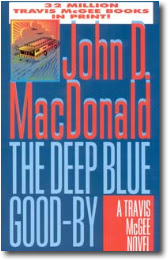 I'm in the process of sorting through my books to donate some to the library. I do this with some hesitation because virtually every time in the past that I've gotten rid of some books, I end up missing one or another at some point.

But keeping so many print books is looking increasingly anachronistic. Many, many books are now always "in print", either as actual print books or ebooks (though many are not!), so odds are that book I end up missing will probably be available in one fashion or another. Besides, even though we devote a considerable amount of space to bookshelves, I'm running out of shelf space.

So in the first triage, I boxed a number of my mystery-thriller "collections" -- the many volumes of Brother Cadfael, Emma Lathen, Ross McDonald, and John D. MacDonald, specifically his Travis McGee series. I'm letting the boxes sit in the basement for a while to make sure I really am ready to give these books away. I've gone back and re-sorted some boxes and reclaimed some of the books for keeping a while longer.

Then Larry De Maria had one of his characters in Madman's Thirst mention the art of John D. MacDonald and his Travis McGee character. Right, I thought. There is a model for lucid narrative style. So I retrieved one of the books from the boxed collections. I mostly bought these paperbacks in Europe so they tend to be UK editions. The Travis McGee books were from Pan.

I discovered to my dismay that these cheap paperbacks were printed in an era when very small print was considered acceptable and on paper stock that yellows dramatically with age. In short, they are virtually unreadable. It's a bit like keeping a vintage wine for so long that when you open it it's turned to brown muck.

So I may want to re-acquaint myself with Travis McGee but it's not going to be with the copies that I've kept for 20 to 30 years and schlepped through a good half a dozen moves. Travis is of course still in print, as befits a classic. From what I was able to read in my yellowed copy, however, it is an open question just how much of Travis I want to re-visit. There are some aspects -- most notably his chauvinism -- that are somewhat dated (and were already at the time it comes back to me).

There are good models for style who are not so dated -- one of my current favorites is C.S. Graham -- so I might be just as well off blazing new trails. In any case, I've ordered a new copy of the first Travis McGee, A Deep Blue Goodbye, so we'll see.

Update: No traction. Good writing but very dated. MacDonald's chauvinism, as expressed in Travis McGee's patronizing attitude toward women, annoyed me when I originally read these books and by today's mores is unsympathetic. So I'm ready to let go of this series and let it be just a happy memory.
Posted by Darrell Delamaide at 11:45 AM