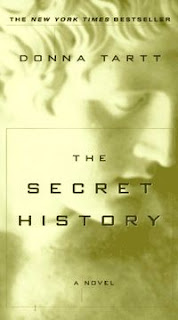 This book had a secret history for me -- apparently quite popular when it came out, but I missed it entirely. Donna Tartt's psychological thriller -- because it's more that than a mystery -- is so erudite you feel smarter when you're done.

Though narrated by Richard Papen, an ambivalent college student who has the patent dishonesty of a Tobias Wolff creation, the novel turns around the enigmatic Henry, a brainiac who by his own admission was dead inside until he killed a man during a bacchanalia he engineered with his fellow classics majors. When one of these students gently begins to blackmail them, Henry, clearly a psychopath, devises the plot to do away with him as well.

There's no mystery to it -- Bunny's death is disclosed on the first page. It is the subtle psychological interplay between this handful of students before and after the deed that propels the book forward.

There's much I love about this book -- the academic setting, the glimpses of the classic Greek and Roman authors, the wonderful literacy of the writing, which reverberates with intelligence. None of the characters are that sympathetic. The narrator's inferiority complex, his anxiety to please, his hopeless love for the only woman in the group, are rather more pathetic. Henry, to the end, remains a cipher. One wishes his fabulous learning would charm, but seeing how hollow the charm of Julian, the teacher, is in the end, it's just as well it doesn't. Bunny, the murder victim, begins to look the most human to Richard after his passing and the crumbling facades of the others, but he was in fact an obnoxious, loud-mouthed, self-absorbed moocher.

The reader nonetheless can relate to the narrator's gradual disillusionment as one by one the mythic heroes of his classics group display their clay feet. In the end, Richard returns to California, yes, wiser and sadder, after a coming-of-age saga that is novel in its twisted values and sardonic air. Because even after the fact, Richard identifies with the sense of superiority that carried his little band through their adventure. But it is Henry who stands as the existential anti-hero at the end of the novel, while Richard appears to be really just a bystander.

The book was published in 1992, based on the author's experiences even earlier at Bennington College in Vermont (called Hampden College in the novel). The students drink, do drugs and smoke in keeping with the period (perhaps it's still the same, though I wonder about the smoking). There are no cellphones, laptops or Internet, no iPods, iPhones or iPads -- making it almost an historical novel. The action skirts the borderline of the surreal -- whether the bacchanalia or murder, or even Richard's harrowing winter break in Hampden or Bunny's funereales. The very existence of Julian and his coterie is surreal. The reality of money intrudes in the plot with the baffling vagary of an East Coast private college with its subterranean seams of trust funds, rich aunts, and financial aid.

More real is the difficulty of discerning betrayal and trust among the friends. Did any of the group ever really like or accept Richard, the poor boy from Plano, California? Did Henry set him up as the patsy by manipulating his desperate need for acceptance or at least acknowledgment? Not least, the sexual undercurrents so important at that age keep the little band roiling in emotion.

The book was fascinating to read, though I wonder how substantial in the end. Tartt's second novel, The Little Friend, set in a completely different time and place, came only 10 years later and earned only mixed reviews. A third novel is said to forthcoming ca. 2012. Safe to say, Secret History remains sui generis.
Posted by Darrell Delamaide at 1:44 PM No comments: 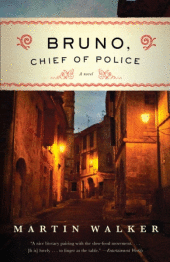 This odd-duck title belongs to a charming book that creates a new genre one could dub the French country cozy. Bruno is an engaging municipal policeman in the village of St. Denis, equivalent to a country constable and firmly on the bottom rung of France's elaborate law enforcement hierarchy.

An easy familiarity with that complicated hierarchy as with all things French enables Martin Walker to transport the reader into the earthy, satisfying life of southern France. Despite the macabre murder that is the focus of the plot, the reader feels bathed in simple luxuries like a homemade paté or the ubiquitous vin de noix.

Walker's lucid, quietly eloquent prose carries the reader through Bruno's idyllic existence and through the mystery of why an elderly Algerian immigrant is brutally killed. The plot is well-drawn, taking the reader into an obscure corner of French collaboration during World War II that most of us never heard of.

Bruno sometimes borders on the too-perfect realization of some male fantasies, but a bachelor in a small town really is the cock of the walk, so we accept his simultaneous flirtation with a female police officer from Paris and an English expatriate -- not to mention his heroic prowess in singlehandedly taming a small riot.

It is a quick, entertaining read and a pleasant sojourn in God's own country.
Posted by Darrell Delamaide at 4:08 PM No comments: