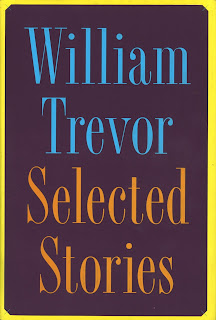 Some 48 of Trevor's short stories from various earlier volumes are collected in Selected Stories, which is the latest book for my serial reading after short stories by Hemingway and Somerset Maugham.

I'm still early in the volume but certain patterns in the stories are already clear. They deal with ordinary people and their ordinary desperation. They are quiet stories about the disappointments, the betrayals large and small that accompany even the seemingly most insignificant lives.

"The Piano Tuner's Wives," the first story in the collection, relates the revenge the second wife of a blind piano tuner takes on the first wife by revising her husband's picture of the world, robbing him of the tangible memories he has of that first marriage. Another story has an old, tired couple's gay son stand them up for his annual birthday celebration, sending instead his current protege, who manages to betray all of them. A story called "Child's Play" portrays a boy and a girl in what we now call a blended family re-enacting the illicit affair and messy divorces that brought them into the same family until each of the "wronged parties" rights themselves. This meant the children were no longer able to control their own world through their fictional play. This gift was now lost and, the author concludes "Helplessness was their natural state" -- a line that can stand for all of Trevor's characters.

The writing is both closely observed and suggestive, economical and evocative. The characters take on layers of personality in the quick, telling sketches. The stories are literary watercolors, not oils, but satisfying vignettes of lives that scrape by with only the barest glimmer of hope.

I'll have more to say as a I finish more stories.
Posted by Darrell Delamaide at 2:52 PM No comments:

The Hare With Amber Eyes 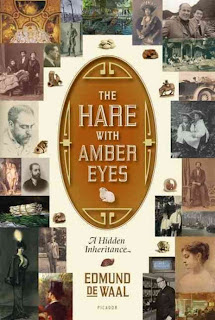 This memoir by Edmund de Waal is enjoyable on several levels. It is a captivating account about a family, the Ephrussis, that once enjoyed the fame of the Rothschilds, but, mysteriously, has vanished from history. It is a history of art collecting written by a ceramicist. Best of all, it is beautifully written. One of the blurbs alludes to W.G. Sebald and I had already recognized the similarity of this memoir to the dreamy fiction or fact narratives of this German writer turned Englishman (though presumably De Waal's is all fact). The author manages the same blend of specific and universal, and in this case the specific is also reminiscent of Patrick Leigh Fermor's virtuoso use of language to describe places far removed in space and time.

De Waal's tracing the Ephrussi family to the Rue de Monceau and Parc Monceau, which I got to know well when I worked for Edouard Cointreau there, was icing on the cake for me. All the reading I've done about the Rothschilds and the history of finance also makes this memoir resonate in a special way.

I have to suspend my reading for a week or two to focus on a book for book club, but I wanted to put down some of these initial impressions while they were fresh. I'll add to them when I finish the book.

The charming Paris story continues in Vienna as De Waal moves on from Proust to Musil and Roth, evoking a magical history of cafes and society as his collection of Netsuke move from Paris to "Zionstrasse" in Vienna and the Palais Ephrussi on Schottengasse and Ringstrasse.

It turns out that this idyll of wealth and luxury is building to a climax that is as moving as it is horrifying, as De Waal chronicles in his measured understatement the consequences of the Anschluss and the humiliation and expropriation of his rich ancestors. The exile of his great-grandfather Viktor and his wife Emmy is moving, as is the narration of the persecution of Jews that brought an end to the Vienna of Freud and Mahler. The pitiful fate of an assimilated Jewish family that proved its loyalty by keeping its money and its life in a city threatened by Nazism is moving. The poignancy of how the Gentile servant secreted the little Japanese figurines and preserved them for the family is a miniature act of courage and generosity in a world turned upside down.

De Waal mentions that the Ephrussi summer home in Kovecses is recalled by Leigh Fermor during his trip across Europe in 1938. The Ephrussi bank figures in The Radetzky March. The Ephrussis in fact are a thread through European history, a transnational family that mocks the artificial divisions of borders and nations.

The short episodes of the netsuke with his great-uncle Iggie and their move to De Waa;'s house in London are followed by an short and elegaic visit to Odessa. Elegy in fact describes the book as a whole, for it is a vivid portrayal of a ghostly parallel universe, now forgotten, where fame and wealth were always hedged by a fragile acceptance in society.

It is an epic story, told with modesty and understatement through the narrow lens of a collection of Japanese sculptures and what they witnessed.
Posted by Darrell Delamaide at 2:33 PM No comments:

The Varieties of Scientific Experience 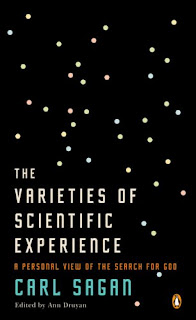 This posthumous edition of Carl Sagan's 1985 Gifford Lectures, rediscovered and edited by his wife Ann Druyan, was our book club selection for June. It stimulated an interesting discussion on natural theology, agnosticism, religion and ethics. I didn't read the whole book but a good part of it, including the key chapter on "The Religious Experience."

My view was that Sagan's ability as an astronomer to vividly describe just what a pathetic speck in the universe mankind is doesn't really help me much. I'm just as much an agnostic regarding man's place in the universe and his momentary existence in the epochs of time as I am about religion and God in general.

Certainly, given what we know now about the universe, all religion is revealed to be a social mythology. The notion of a personal God who is attentive to mankind's prayers, intervening in our lives and taking us up into heaven is, in the context of the entire universe, as improbable as the idols and superstitions of primitive tribesmen.

Just as certainly, there is a spiritual dimension to the human personality and real experiences that can only be called religious. For me personally, Teilhard de Chardin's effort to reconcile his religion with his scientific understanding in the teleological notion of God's becoming is as close to satisfying as a natural theology is likely to get. Some in our group argued against it, saying evolution does not in fact mean progress. But I'm not sure Teilhard was speaking of just progress as part of the becoming.

In any case, what is more important to me is the ethical consequences of whatever belief or value system one has in life and I found this missing in Sagan's book (it might have been in a chapter I didn't read but no one corrected me when I said this in the meeting). For this reason, I could just as well have skipped it, since I already accept his scientific view of the universe.

But the book occasioned a good discussion about things you rarely get a chance to talk about, so that alone made it worthwhile.
Posted by Darrell Delamaide at 2:56 PM No comments:

Under the Color of Law

This is my second Michael McGarrity novel featuring Kevin Kerney, who is embarking in this book on his new job as police chief in Santa Fe. I downloaded it to read during my trip to Santa Fe and it was a hoot to have the hero driving down Cerrillos and investigating at the College of Santa Fe (since closed), all very near to where I was staying.

McGarrity is an engaging writer and he captures New Mexico well -- and that is enough for me. Just as well, because there's not much else. Kerney, who debuted in Tularosa, which I enjoyed, is a bit more robotic in this book, though he was not particularly colorful in the other one. His improbable long-distance marriage to an Army intelligence officer doesn't really work on any level -- not as romance, not as dramatic counterpoint, not as plot device. In fact, it is more distracting than anything else.

The plot is also improbable. A Washington insider on the make mobilizes his minions to cover up his involvement with a new technology that will make him very wealthy. While a plot involving government operatives carrying out "sanctioned removals" seems less far-fetched every day, the depiction of the psychopathic hit person here is fairly two-dimensional. Ditto for Kerney's police cohorts, who greet their new chief with suspicion but are converted into loyal followers by his sagacious decisions.

The novel -- not quite thriller, not quite police procedural -- falls into a genre crack. Tularosa also had an adventure story element missing in this book. It was, as is generally the case with series, better than this new book.

Perhaps I'll read another McGarrity on another trip to New Mexico, or sometime when I'm homesick for Santa Fe. He provides a reliable read with a great sense of place for some easy-going relaxation.
Posted by Darrell Delamaide at 11:00 AM No comments: