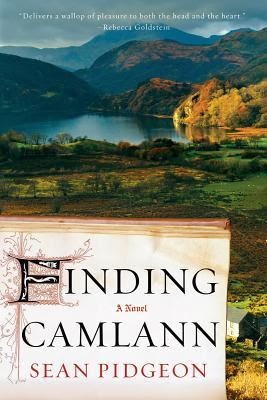 It was the striking photograph of a Welsh landscape with dark mountains and lowering sky, punctuated by autumnal yellow and green pastures that drew me to this book with its odd title and unknown author. The back cover copy explained it is about an archaeologist (always a favorite of mine) who teams up with a Welsh linguist to find the real King Arthur. Who can resist?

In fact, Sean Pidgeon has produced a beautifully written esoteric mystery that falls into a sub-genre I'm tempted to call the intellectual thriller. The jacket copy compares it to Possession, though the obscure medieval works traced here are not as accessible as the Victorian poetry of A.S. Byatt's novel. The unfamiliar Welsh history and the baffling Welsh names threaten at times to tip from mysterious into overwhelming. But Pidgeon manages nonetheless to compel the reader to follow his hero and heroine as they track literary clues to the real Arthur's gravesite in a tightly plotted novel that involves a love triangle and betrayal at several levels.

Best of all, it has a penetrating sense of place as Pidgeon patiently takes his characters through the English and Welsh landscapes. The Arthurian legend has its origins in the borderlands between the two countries, so rarely separated in history despite the fervent nationalism on both sides. The novel gropes into a past of monasteries founded and dissolved, poets preserving history in a bardic tradition, coded descriptions that evolve with the language and must be deciphered to find the truth.

So it has as much of the Da Vinci Code as it does Possession, though considerably more sophisticated. Likewise, the romance is a genuine love affair and much more adult than anything in Dan Brown's books. It is not a murder mystery, though a fatal factory explosion lurks in the background and a death that appears to be an accident may be something else. The characters are well drawn and sympathetic -- even the less savory ones.

Who was Arthur? He was not the chivalrous king of the Round Table in Thomas Malory and certainly not the Roman soldier of the lame Clive Owen movie. The archaeologist and linguist, aided by the crotchety Oxford don, find a different explanation, along with the documentary evidence to support their thesis. The book is about their quest, and less about its achievement.

The Camlann of the title refers to the legend of Arthur's final battle, during which he was fatally wounded. The allusion was lost on me; though I've read Morte d'Arthur and other books about Arthur, the site of the final battle was not something I retained. The novel was supposedly selected by the Book of the Month Club and QPB, but you wonder if it would find a wider audience with a different title. I came across it only because it was on the display table at Politics & Prose. Like I say, the cover drew me in, and when I started reading it I finished it quickly.

The mystery and beauty of the landscape is evokes so effectively that I began looking up hiking tours in Wales to visit this terrain and see it for myself. I passed briefly through Wales on one of my research trips for Superregions, taking the ferry across the Irish Sea to northwest Wales. I acquired by slate tablet with a Celtic cross there. I've often felt an affinity for Wales and Celtic history -- one of the possible origins of the name Darrell is Celtic.
Posted by Darrell Delamaide at 9:29 AM No comments:

Bring Up the Bodies 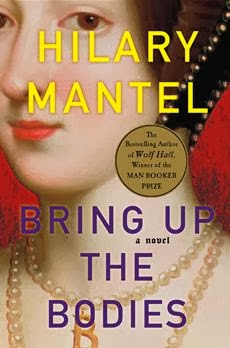 Hilary Mantel upped her game from the already high level of Wolf Hall in this sequel chronicling the further career of Thomas Cromwell and the sad fate of Anne Boleyn. As she did with Thomas More, Mantel is at pains to demythologize "Anne of the Thousand Days" and portray her as a scheming, vindictive harridan while not actually pronouncing a verdict on her alleged adultery and incest.

But if Anne Boleyn is the object of the action in this new book, Cromwell is still the subject and Mantel continues to probe every nuance of this complex character -- who may or may not have anything to do with the historical figure -- in her mellifluous prose. It is tempting to quote passages where she veers so effortlessly from lyrical description to hard-nosed dialogue; the sly, witty asides; the breathtaking insights into mixed motives. Instead, I would just say: Read this book; it repays you on every page.

Mantel portrays Cromwell's relentless campaign against Anne Boleyn as a calculated if belated revenge for Wolsey's downfall. He implicates various court figures in the charges of treason and adultery on the basis of their role in cheering the fall from grace of his mentor. The workings of Cromwell's mind are described so gracefully you scarcely realize how genuinely vindictive he is. But the author also intimates how Cromwell's machinations bear the seeds of his own destruction. Harry Percy, hounded into perjury and disgrace by Cromwell, acutely observes that he must know what lies in store for him from a king who toppled Wolsey, beheaded More, and condemned the erstwhile love of his life to death.

Mantel also manages to maintain the reader's sympathy for the monstrous Henry VIII, even while portraying him as a narcissistic, psychopathic tyrant. His charm, his charisma beckon across the centuries in a re-creation that remains fresh despite all the books and movies that have already portrayed this historical giant.

The brief glimpses of a convulsed Europe, divided by religion and dynastic rivalries provide a colorful backdrop the drama in England. But doctrines and foreign dynasties both remain subordinated to the central issue of maintaining the Tudor succession -- the end that justifies all of Cromwell's and Henry's actions.

Not to be overlooked is the elemental barbarity of the age that produced Shakespeare and the King James Bible. Torture and beheading are bad enough, but the intimations of being hanged, drawn and quartered are unspeakably gross to modern sensibilities. The subjugation to tyranny in a land proud of the rule of law is another historical theme that offends our sense of democracy. But the hypocrisy of the case built against Anne Boleyn -- based on innuendo rather than evidence and hiding the real political motives behind fabricated conspiracies -- holds lessons for our own time and country, where one political party fueled by corporate funds works to create an alternative reality to dupe the public.

There is to be a third book and a third trip to the gallows to finish the Cromwell saga. Can't wait.
Posted by Darrell Delamaide at 1:25 PM No comments: