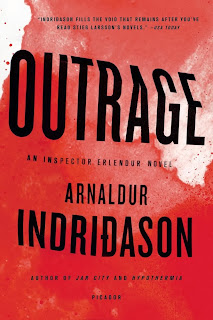 Whether due to the Icelandic original or the translation, the simplicity of the language in these mysteries by Arnaldur Indridason is part of their appeal. Simple declarative sentences, deft descriptions, matter-of-fact depiction of emotions -- it all keeps the reader moving along against the backdrop of this forbidding climate, this claustrophobic society where violence is rare but hardly unheard of.

In this book, Arnaldur gives Erlendur a break, sending him off to brood with a question mark as to whether he will ever come back. That leaves Elinborg in charge, his female deputy who plays just a supporting role in the earlier books. With her as the protagonist, it is certainly less intense. While Erlendur will muse about the fate of man and the sadness of his relationship with daughter, Elinborg's thoughts go to tandoori cooking or the more normal challenges of dealing with an adolescent son.

The mystery here is a man bites dog type of thing as the first chapter sets up what looks like a fairly predictable scenario, only to have a twist turn it all upside down. There are clues, a couple of red herrings, but the readers feels as Elinborg does at one point that almost anyone she has encountered could be a suspect. There is little action. Elinborg interviews, reflects, interviews again. She takes a couple of trips outside Reykjavik but the most dangerous thing she does is follow a teenage girl to a cemetery at night.

The mystery, characterization and sense of place carried the book, but I wouldn't want to see Elinborg take over the series. Erlendur adds a dimension of darkness that pairs nicely with the climate. Even in this book, his unseen presence gives  hints of turbulence underneath.
Posted by Darrell Delamaide at 11:37 AM No comments: