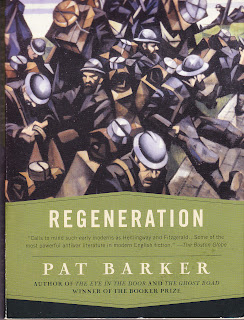 I want to read Ghost Road by Pat Barker, so I thought I should start with the first book of the trilogy to lead up to it as the third one. I did not realize that the action of the novel is not actually in the war theater but in a psychiatric hospital where the reader is exposed to the horror of the trenches in the psychic damage it does to the soldiers.

Nor did I realize that the characters were largely real historical characters -- not only the poets Siegfried Sassoon and Wilfred Owen, but the doctor who treated them, William Rivers.

The horror is still there, as Barker relates the traumas that led these men to lose the power of speech or in other ways find physical expression for the grisly sights they were exposed to. But this setting allows her to approach in a more nuanced way the real dilemmas between duty and sanity, courage and cowardice, discipline and empathy.

One of the more moving dramatizations for me was when Sassoon visited a club in Edinburgh and while waiting for Rivers to have lunch speculated on the inevitable hostility between old men and young men, with the former demanding that the latter give up their lives for decisions made by the old men. Along with Rivers' own growing ambivalence as an older man charged with returning these younger men to battle, this casts the dilemma in a very poignant way.

The point of trying to understand the contemporary thinking about that war is to have a better feeling for the moral dilemmas of our own time. The choices we are faced with will also look much clearer in history's rear-view mirror. We have to make the choices in our own fog of war, however, and Barker's ambivalent psychological landscape gives us some idea of how difficult that is.
Posted by Darrell Delamaide at 8:57 AM No comments: