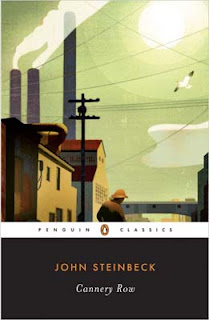 I picked this up on a whim and it turned out to be a delight to read. The Post or Times recently ran a story about the last sardine cannery in the U.S. closing down – the end of a world, the reporter wrote, chronicled by John Steinbeck in Cannery Row.

The reporter neglected to mention that while it was set in a Monterey dominated by the canneries, the Steinbeck novel never ventures into the factories or factory life. Rather, it portrays a small Depression-era community on the other side of the tracks that includes a flophouse with a group of deadbeats, a whorehouse, a Chinese-operated grocery, and a “marine laboratory” that probably would be shut down by a dozen laws nowadays.

It is a series of vignettes about this community rather than a narrative, though events do move towards a climax of sorts with the second effort to host a party for Doc, who operates the laboratory. The main characters are Mack, the leader of the flophouse group, and Doc, though we get little inkling of their interior lives.

What moves the reader along are the wonderfully observed details of the life in Cannery Row, the character quirks of the individuals, and above all the delicious irony of the narrator. This is a very funny book, with touching moments of a broad tolerance for human failings and the small joys that all of us try to salvage from larger dreams gone awry.

Take this riff on the Model T Ford: “Someone should write an erudite essay on the moral, physical, and esthetic effect of the Model T Ford on the American nation. Two generations of Americans knew more about the Ford coil than the clitoris, about the planetary system of gears than the solar system of stars…Most of the babies of the period were conceived in the Model T Fords and not a few were born in them….”

Steinbeck's style is spare, but still has soul – Hemingway with heart. For instance: “The Carmel is a lovely little river. It isn’t very long but in its course it has everything a river should have. It rises in the mountains, and tumbles down a while, runs through shallows, is dammed to make a lake, spills over the dam, crackles among round boulders, wanders lazily under sycamores, spills into pools where trout live, drops in against banks where crayfish live. In the winter it becomes a torrent, a mean little fierce river, and in the summer its is a place for children to wade in and for fishermen to wander in….”

Steinbeck won the Nobel Prize largely on the strength of Grapes of Wrath and East of Eden, but his smaller books, this one and Of Mice and Men, also stay in print for a reason.
Posted by Darrell Delamaide at 4:22 PM No comments: 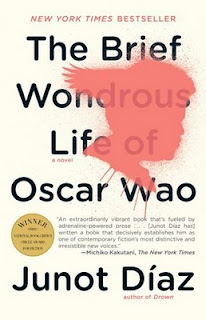 There's many things I like about this book, though I wonder how long it will stick with me. I also wonder whether anybody will be talking about Junot Diaz 10 years from now.

I like the energy, exuberance even, of the language, harnessed to a truly original voice. The admixture of Spanish faithfully reflects the polyglot's tendency to use the best word to describe something, even if it means mixing languages.

I like the portrayal of Dominican life, both in Santo Domingo and New Jersey. The collage of Dominican history, the vivid description of the Trujillo terror, the insider look at another culture are all enriching.

I like the character of Oscar, his nerdiness, his life of comic books and video games. Diaz conveys all this with such authority that you feel like something of a nerd yourself reading it.

There are some things I don't like. I don't think we get inside Oscar enough. The narrator(s) remain detached really, and we have only vague notions of what's going on inside Oscar.

I don't like the author's glorification of the sexual prowess of Dominican men. For, make no mistake about it, while he seems to be making fun of it and couches many of his observations as ironic, there is more braggadocio here than satire. After all, the chief frustration of Oscar's brief life -- hardly wondrous -- is not getting laid, and this frustration arises in great part because of the unapologetic insistence of Yunior and everyone else in Oscar's life that this is the ultimate good in life. (Spoiler alert) So when we learn through a posthumous note that Oscar in fact does achieve this elusive goal -- in an impossibly contrived way -- we can indeed view his life now as wondrous.

There is in fact so little in the book in terms of moral choice -- all the characters are carried along by forces beyond their control, above all the tiresome fuku -- that I suspect it is in fact a superficial novel, dazzling in the virtuosity of its language but not destined for a long shelf life.

Yunior's priapism costs him the love of his life, but he seems to come to terms with it pretty easily. It's not so much that he learns any lessons or makes any choices, he just kind of runs out of energy after sowing his wild oats.

Oscar is pathetic, not tragic. His life is not wondrous, but sad. The other characters remain largely ciphers in a fable.
Posted by Darrell Delamaide at 2:18 PM No comments: