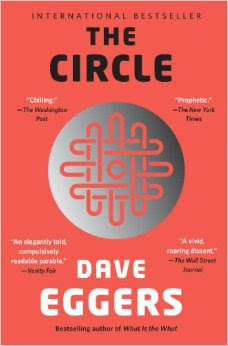 Dave Eggers' brilliant novel veers from post-apocalyptic thriller to satire to parody as he takes the tenets driving social networking and Silicon Valley meglomania to their logical conclusion in the tale of a young ingenue, Mae Holland, who goes to work at The Circle -- a combination of Facebook and Google with a dash of Twitter thrown in -- and quickly become an integral part of a proto-totalitarian surveillance tool.

The world at the beginning of the novel is recognizable as our own, given a couple of years and mergers. The insight of the Three Wise Men who run The Circle was to combine existing social network capabilities in a seamless web, so to speak, of communication.

Quickly, however, the "social" in in social networking becomes a fascist imperative, with first the workers at The Circle and then the population at large expected to participate constantly. Mae is chided after her first week for not participating enough in the online networking and the real life events of the sprawling campus that is a city unto itself. In a dazzingly brilliant pun, Eggers has all the workers ranked according to their level of participation -- their PartiRank -- which conjures up 1984 and Darkness at Noon.

Mae adapts quickly and becomes ashamed of her independent ways -- going on a late-night kayaking trip, for instance, without sharing the experience with The Circle. She is susceptible to the influence of the wise men and becomes a useful foil for propagating their agenda. She sums up the credo of The Circle in words she's not even sure are her own in what becomes a manifesto for the company: Secrets are Lies. Sharing is Caring. Privacy is Theft.

Oh my. Mae is brought to the Circle by her college friend Annie, a star at the company, but Mae's meteoric rise quickly takes her even higher, so that Annie finds herself bitterly envious of her friend's success. Mae must deal with Annie's burgeoning enmity, with the resistance of her parents and old boyfriend in Fresno to the surveillance world envisioned by the Circle, and with her passion for the mysterious Kalden, who seems to have access to the inner sanctum of the Circle but may be a spy from a rival company.

The reader hopes against hope that Mae will wake up to the peril of the world she is embracing and that suspense drives the reader to the climax of the novel when she must choose between the totalitarian vision of the Circle leaders and the alternative presented by the enigmatic Kalden. It is worth reading the novel to find out what she chooses.
Posted by Darrell Delamaide at 3:10 PM No comments:

Summer has provided some good time for reading but not much for blogging. The best book I read this summer was Lily King's Euphoria, a fictionalized version of the love triangle experienced by Margaret Mead and her first and second husbands as they were all researchers in New Guinea. It was a beautifully written, sparingly told love story set in conditions beyond exotic. It was helpful that the author did not attempt to use the actual historical characters -- it gave her more freedom, as I noted in my WIRoB blog post.

Nell's husband became increasingly unsympathetic in the course of the novel, and in fact the reader wonders what the attraction was in the first place. But it realistically portrays how the charm of a particular moment or period can set our lives in a certain direction that then becomes hard to change.

Joseph Kanon's Leaving Berlin was one of his best thriller to date. He captures the ambivalence of a period that drew creative personalities like Berthold Brecht to the young German Democratic Republic even in the face of the appalling reality of Stalinism. Layered on top of this background is the personal story of Alex Meier, a refugee caught in his own vise of compromise compelling him to return as a spy for the CIA. If the East German Stasi is ugly, so is the American agency. Meier's rekindled romance with an actress there and its role in completing his mission rounds out a compelling read replete with tellingly accurate details.

Ben Winters' World of Trouble completes the Last Policeman trilogy. Predictably, this third book loses a little of the momentum and freshness that propelled the other two. The previous novel, Countdown City, had set up this quest for Henry to go look for his sister Nikki, one of the least interesting characters in series. She is so unsympathetic that it's hard to share Henry's concern for her welfare. Also, the plot is more plodding, with none of the clever twists and turns that characterized the previous two novels.

Far North by Marcel Theroux is another good post-apocalyptic novel, similar in many respects -- too similar sometimes -- to the Chang Rae Lee book. It too involves a picaresque journey of a young survivor with many twists, evil characters and a firm belief in the resiliency of the human spirit.

The Empty Quarter by David Robbins is another in the series involving the intrepid pararescue troopers, this time on a mission to Saudi Arabia's empty quarter that is off the grid in more senses than one. Not as good as the earlier one, but still easy to read.

The Waterworks by E.L. Doctorow traced a macabre experiment in 1871 New York that you realize only slowly is a chilling critique of modern medicine. It has the period detail and deft characterization that mark Doctorow's better known works, while the baroque pace is somewhat more streamlined.
Posted by Darrell Delamaide at 2:50 PM No comments: