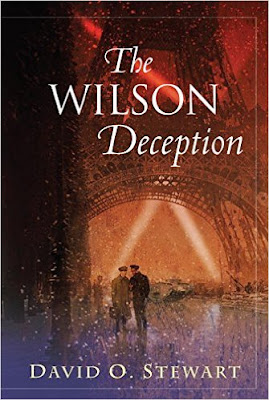 David Stewart continues the adventures of country doctor Jamie Fraser and his comrade in arms, Speed Cook, that he ably chronicled in The Lincoln Deception. It is a generation later, and the inevitable disillusionment of age has set in for both protagonists. But the spark of idealism still burns as the two maneuver in Paris during the Peace Conference of 1919 to keep Woodrow Wilson on track and to clear the name of Speed's son, Joshua, falsely accused of desertion after bravely fighting in World War I with America's little-known black troops.

For being an historical novel, The Wilson Deception is surprisingly timely. It is the Middle East boundaries drawn at this peace conference that are at the heart of our current problems in Syria and Iraq. And it is the intrigues of Clemenceau to punish the Germans that led to World War II, the second defeat of Germany, and the formation of the European Union as a way to ensure permanent peace -- a project that is now facing challenges of its own. And, not least, it is a well-rounded portrait of a president whose reputation is under new attack because of the racist views he had as a white southerner in that period.

As stimulating as all this is, however, it is the novel itself that carries the reader along as Jamie and Speed pursue their goals against this historic backdrop. Stewart's well-paced narrative, with colorful and often surprising descriptions and deft characterizations, has just the right mix of drama and humor, along with that touch of melancholy that accompanies getting older. The real-life historical characters -- Clemenceau, Lawrence of Arabia, and, above all, Allen Dulles, the future director of the CIA -- are presented with a panache that brings them to life. The plot is credible enough, though it is on thin ice when the heroes try to get Lawrence involved in their scheme to dupe Wilson by balancing the future of the Middle East with the fate of Speed's son.

But the reader is along for the ride, from the riots on the Place de la Concorde to the climactic scenes at Le Bourget airport, cheering on Jamie and Speed as they test their bond of friendship in a new adventure.
Posted by Darrell Delamaide at 1:06 PM 1 comment: