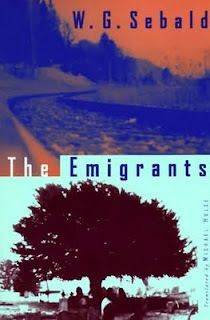 It's a mystery how a Bavarian living in England and writing in German can produce such shimmering prose in translation. Perhaps it's because W.G. Sebald, who headed the British Centre for Literary Translation at the time of his premature death, reviewed the translation himself, or because the translator is also a poet, or because the prose in the original is so powerful -- or, most likely, all of the above.

What a dazzling vocabulary, which carries the reader along in a torrent of detail rendered so deftly that you become entranced. The prose captivates the reader as the author takes you so effortlessly through a maze of memory and recollection, recountings and memoirs and brings you to the poignant moment between life and death. This is simply an outstanding book.

Several people, notably John Marks, have recommended Sebald to me and I did start some time ago to read Austerlitz without finishing it. Perhaps my mood is different now or this book is more accessible, but in any case I finally understood what they were talking about.

In narrating his encounters with the four emigrants of this book -- are they real, fictional? -- Sebald verges into the phantasmagorical so slyly you scarcely realize it's happening. But it's a fantasy rooted always in mundane detail. A great uncle is accompanying an heir who doesn't just take part in an air show in France but in the Quinzaine d'Aviation de la Baie de la Seine at Deauville in August, 1912.

One of the most appealing aspects of Sebald's prose for me is his devotion to geography. When I was writing Superregions, it became clear to me how important it is in understanding how people behave. The whole ghostly theme of this book is "wandering out" of your native home (the German title is Die Ausgewanderten) to a different setting.

The combination of Sebald's love of words, his attention to detail and his focus on geography yields some especially nice passages: "So I flew once more to New York and drove northwest along Highway 17 the same day, in a hired car, past various sprawling townships which, though some of their names were familiar, all seemed to be in the middle of nowhere. Monroe, Monticello, Middletown, Wurtsboro, Wawarsing, Colchester and Cadosia, Deposit, Delhi, Neversink and Niniveh -- I felt as if I and the car I sat in were being guided by remote control through an outsize toyland where the place names had been picked at random by some invisible giant child, from the ruins of another world long since abandoned."

In typical fashion, Sebald takes you from upstate New York in 1984 just a few pages later via Uncle Ambros's memoir to Jerusalem in 1912, after passing through Deauville in 1991.

Sebald's attitude to his native Germany is decidedly ambivalent. He describes a grotesque fellow passenger on a train ride in Germany and observes: "I could not say whether the physical and mental deformity of my fellow-passenger was the result of long psychiatric confinement, some innate debility, or simply beer-drinking and eating between meals." And yet two pages earlier, another memoir (real, fictional?) lovingly described Sebald's own native countryside: "In the summer of 1921, soon after our marriage, we went to the Allgaue, and Fritz took me up the Ifen, the Himmelsschrofen and the Hohes Licht. We looked down into the valleys -- the Ostrachtal, the Illertal and the Walsteral -- where the villages were so peaceful it was as if nothing evil had ever happened anywhere on earth."

These are largely dark stories of despair, where the simple pleasures of life in the end are overcome by humanity's sad fate. The Holocaust and its impact is an abiding theme of Sebald's work and in this book, the tragedy is everywhere. But it's not just the Holocaust. Rather, that overwhelmingly evil event is just an extreme manifestation of the human condition.

I look forward some day to reading this book again, perhaps in German. It is so rich, it's clear that one reading only scratches the surface. Sadly, because of an automobile accident that killed Sebald at age 57, we will only be able to enjoy him by reading and rereading the handful of works he has left behind.
Posted by Darrell Delamaide at 9:59 AM