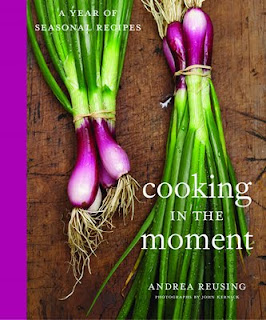 It is a fair question when you already have literally hundreds of cookbooks why you should ever buy a new one. It's safe to say that I could do a Julie and Julia and cook one recipe a day from my existing cookbooks and not run out until it was time to go to the old folks' home.

But, like everything else, taste in cookbooks change. Julia Child deserves all the credit she gets for revolutionizing Americans approach to food and cooking, but not too many people will be cooking the recipes from Mastering the Art of French Cooking. The only three I still use regularly are cassoulet, ratatouille and boeuf carbonnades.

I have numerous cookbooks I've picked up along the way that simply are not very good cookbooks. I have English-language books on Swiss cuisine I bought in Switzerland -- totally useless even when I wanted to do Zuercher geschetzeltes recently. I have another with South African cuisine that I've never used. I have a big book on Spanish cuisine, in Spanish, that I use every once in a great while simply to decipher the recipe for paella with the aid of a dictionary. I have the Larousse gastronomique in French, but it may as well be in Greek for all the use I get out of it. I still have a few cookbooks in German, but they're not very practical to use here. Chef's cookbooks are by and large useless, I find -- too complicated, too many hard to find ingredients, not practical, etc. -- and I think sometimes their purpose is to convince you that you have to go to a restaurant to get a really great meal.

The modern classics -- Julia Child, Marcella Hazzan, James Beard -- still sit on my shelf, along with Elizabeth David and others in that first wave of cookbook authors. There's no reason to think that just because these books are devoid of lovely color photos that the dishes produced from these recipes will be any less delicious. New cookbooks nowadays have a color photo virtually every other page. And that of course is an art it itself, and can sometimes bear little resemblance to what you will come up with following the recipe, given all the tricks and shortcuts the photographers use.

But times change, and just as translator Richard Howard says every generation should have a new translation of the classics, many of the standard dishes can use a freshening up and "translation" for the current generation. For one thing, Julia and Marcella had to find substitutes when ingredients readily available in France or Italy were not so easy to find in the U.S. Some dishes they would not even include for that reason. Now, many of these ingredients are much easier to come by and mail order is much more sophisticated.

A cookbook written today can cater to the new focus on fresh, local products, put more emphasis on vegetables like kale and broccoli, give advice on sustainable sourcing -- addressing concerns that hobby cooks a generation ago didn't have.

But cookbooks themselves are under threat from online recipe sites like Epicurious. These books with their gorgeous photos -- and it is the photos now that distinguish them from the online recipes -- are not searchable. In pursuit of the seasonal, it's nice now to go to the farmer's market and pick what is in abundance and looks good, and hunt up a recipe for it when you get home. But who wants to plow through a half dozen indexes to find a good treatment for rapini. Just put it in the search box at Epicurious and you have dozens of recipes to choose from.

So managing cookbooks becomes a logistical challenge. We keep about 60 in the kitchen in our pseudo-hutch -- several of the standards, many favorites, and others that get swapped out seasonally -- braising books in the winter, grilling books in the summer. But the only way I can actually get to the recipes in these books is to pick one or two at random and leaf through them, noting recipes that are appealing and seasonal, and then arbitrarily selecting some to put on a shopping list and actually cook. In this way, we find many wonderful dishes that you could easily repeat, though we hardly ever do. Some we cook for guests, others just for ourselves (concluding almost invariably that this would be great for guests).

Not surprisingly, I find myself gravitating most often to Mediterranean dishes -- French, Italian, Spanish, or regional cookbooks that include Turkey, Lebanon, Morocco and so on. Paula Wolfert is a current big favorite, but Sara Jenkins' Olives and Oranges is also one I turn to a lot. I have several Indian cookbooks, but it's not that easy to assemble the ingredients if you just want to cook Indian every once in a while. We have a number of Mexican cookbooks and perhaps we can do more with them this summer.

But it's a wonderful problem to have. As I've said before, we live in something of a foodie paradise right now, with a true cornucopia of choices. Who knows what tomorrow brings. While my attitude is not exactly "Eat, drink and be merry for tomorrow we die," I am inclined to order a new cookbook from Andrea Reusing when Steve Sando recommends it, and save the $20 to buy it by skipping that pizza and beer and staying home with leftovers instead. (It cost $20 from Amazon, but retails for $35, and I have to say cookbooks are something I will generally buy from Amazon. I don't understand why Politics & Prose, for instance, hasn't caught on and made it an incentive for their membership to offer a permanent discount on cookbooks.)
Posted by Darrell Delamaide at 7:08 PM