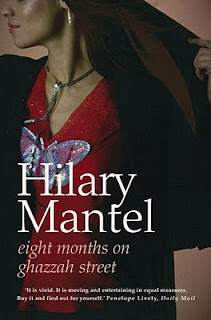 It took me some time to read this horrifying novel by Hilary Mantel, not because it isn't well-written or compelling, but because often it's simply so painful to read. There is a mystery, a shadowy bit of skulduggery that gathers force toward the end, but the impact of the book is not in this artifice but in the portrayal of life in Saudi Arabia based on the author's own experience of living there.

We all know this backward desert of Wahabism is terrible, but just how offensive it is to Western sensibilities, how hypocritical the royal family is to commit every sin in the Koran while inflicting this puritanical code on its citizens, and how corrupt this combination of hypocrisy and wealth can be is -- painfully -- drawn with Mantel's gifts of description and characterization.

I visited Riyadh briefly on a reporting trip at about the same period Mantel describes -- when the bloom of the oil gold rush was fading and the Kingdom was forced into budget cuts that led to many grand building projects being abandoned. The place gave me the willies, but I was there and gone in a few days. More telling is the experience of a reporter colleague of mine who had spent much more time there and knew it well. He had the bad luck to be in the country when a story of his appeared in the West that was more than a little critical of the regime. Some Ministry called him at his hotel and said he should come around to discuss the article with them. Because he knew the country so well, he said, sure, I'm staying for several days so why don't I come by day after tomorrow. He hung up the phone and called a cab to the airport to take the first flight out of the country. I don't think he ever returned.

Mantel's depiction of the mortal threat of living in a country that has no rule of law is devastatingly realistic. Her biting and brutal humor seems at time like satire -- except there's no exaggeration involved. The Pakistani neighbor of the protagonist, Frances Shore, tries to reassure her by explaining that they don't really stone adulteresses any more -- they throw a few token stones then shoot her. "I was so relieved," Frances wrote mordantly in her diary. The British expats discuss some of the more famous customs of the country, like cutting off the hands of thieves, by noting in passing that they use anesthetic and have doctors standing by to bind up the wound.

The expats tell each other, as they are told, that they must respect the cultural differences of the host country. You might as well say you should respect the customs of cannibals or acknowledge that slavery is legitimate if it's part of the local culture, because the Wahabi perversion of Islam is as benighted and savage. The portrayal of this culture in Mantel's novel is enough to turn the biggest fan of multiculturalism into a raving advocate for the mission civilatrice of the West.

The novel works at many levels, however, and is also a crushing indictment of Western materialism and greed. Frances -- who, irrelevantly for the novel, is described as a cartographer -- and her architect husband go to Saudi Arabia, with all its known hardships, because the money is so good. They are willing to take on the deprivation (no alcohol is the least of it) to make a pile that will enable them to buy a flat in central London. Their colleagues are other expats similarly motivated by greed, who are willing to put up with a little hell to get ahead. So imagine their dismay when the checks don't arrive and they're still stuck in hell.

Frances and her husband, Andrew, are not able to get into one of the foreigners' compounds when he goes to work on a new ministry building in Jeddah and instead are installed in a company flat in an apartment block along one of the main roads. The reader sees immediately that this will not be a good situation for Frances when her husband, who had arrived earlier, locks her into the apartment her first day there, for her own protection. Her sense of isolation and alienation become palpable with the description of her endless days of nothingness, with the choice of staying in a blank apartment breathing the stale air-conditioned atmosphere or venturing outside into the blazing, fly-bitten heat and hazarding the leers and catcalls of Saudi men who consider unveiled Western women to be whores.

Out of desperation, Frances becomes friends of sorts with the Pakistani woman across the hall and the Arab woman living upstairs, each of whom explains her dismaying rationalization for the role of women in this puritanical society. The flat directly above Frances and Andrew is supposedly empty, but Frances hears sounds of life there. She is then told that in fact the flat is used by a junior member of the royal family for illicit trysts, but she comes to suspect that is simply a tale put out to satisfy a foreigner's curiosity.

The development of this mystery and its denouement are not the most effective pieces of the novel. The frustration and futility of trying to find out exactly how the tragedy unfolds is more poignant than the actual events. In fact, this gothic part of the story is almost a subplot, or a symbol for the much more mundane corruption that is portrayed throughout the novel.

Mantel spent four years in Saudi Arabia with her real-life geologist husband, and she says in a Q&A in the back of this edition that the day she left Jeddah was the happiest moment in her life. She brings her considerable literary gifts to bear in a fictional account of her stay that makes you understand why. Frances is still in the country when the novel ends, now settled in a sparsely inhabited compound surrounded by freeways, but the reader is oh so happy to get an exit visa and leave this oppressive world.

Mantel is now famous as the author of Wolf Hall. This earlier novel makes it clear that she is anything but an overnight success. The terrific empathy and the skillful craftsmanship that distinguish the winner of the Man Booker Prize are already abundantly evident in this book.
Posted by Darrell Delamaide at 11:33 AM