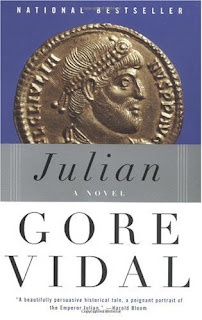 Gore Vidal seemed such a force of nature it was surprising to hear that he died at age 86. He has been in some respects a role model for me as a writer. I admired his graceful style, his trenchant analysis and wit, his versatility as a writer of satire, historical fiction, screenplays, and essays.

However, I often found his novels cold and soulless, more about style than feeling. Julian I liked for his irreverence, and Lincoln and Burr for making these historical figures so real. I liked the left-wing slant of his political and social criticism. His notion that the Establishment runs the country with the president as a front man has never been more apt as in this age of Citizens United and a candidate as robotic as Mitt Romney.

I also liked his epicurean lifestyle (though not his sexual libertinism) and his long sojourn in Ravello. How long will any of his work last? Does Gore Vidal have any sort of legacy, literary or otherwise? Hard to say. I don't think his books are great literature and he may be one of those larger than life characters that people will look back at and scratch their heads at why he seemed so prominent.

But he was a witty, intelligent renaissance man, a prodigious writer, and an important ingredient in the tempestuous cultural milieu of my generation. His time is past and he probably will not be greatly missed, but the qualities of skepticism, irony and irreverence he brought to both his fiction and nonfiction are more important than ever in these days of political polarization.


Posted by Darrell Delamaide at 8:43 AM