The Siege of Krishnapur 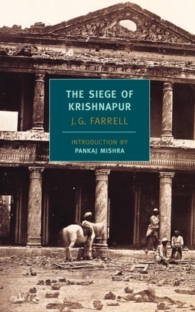 J.G. Farrell's epic of the East India Company's rule on the subcontinent and the 1857 mutiny is a compelling action story, but it is above all a savage satire and a novel of ideas. His success at combining these genres into a literate masterpiece won him the Booker Prize in 1973.

Farrell depicts in biting detail the fatuousness of British rule in India as the colonialists preserved their Victorian preoccupations in a fundamentally hostile environment. They were largely clueless -- as Farrell's protagonist, the Collector, observes -- about the culture around them and smugly disregarded how their new subjects chafed under their rule. Still, the mutiny itself was not really a surprise. The only surprise was that it took so long to put it down and the cost was high.

The physical environment was also hostile. Farrell relentlessly pictures the unrelenting heat, the blistering weather of India's northern plain, where the fictional Krishnapur, like the Lucknow it is based on, is located. During the siege itself, the role of the heat in amplifying the ever increasing hardships is almost nauseating -- the rot, the smell, the cholera, the death. The horrifying invasion late in the siege of the cockchafers -- little black bugs who descended on the Residence by the million -- matches anything Hollywood has put on the screen. Even in this scene, however, Farrell manages a hilarious take on Victorian prudishness.

The precision of the language and description, ranging from a discussion of German rationalism to details on gunnery, makes the novel so tangible the reader has no trouble inserting himself into the scene. Especially the terminology to describe British life in India, with its assortment of servants and privileges, transports the reader back to this time.

As brutal as he is in satirizing the motives and values of the imperialists, Farrell nonetheless depicts the casual courage and residual integrity of some of the characters. The fact is that some of them survive the five-month siege in the face of long odds and as a rule recover from the ordeal to resume an ordinary life back home.

Farrell says in a brief note that he relied on numerous firsthand accounts from the Lucknow siege and the details of the hardships have as a result a terrifying authenticity.

As Pankaj Mishra notes in an introduction to the edition I read, Farrell keeps the Indians themselves largely offstage. The one Indian character, a local maharajah, is a weak and puzzling addition to the narrative. The introduction, by the way, reads better as an afterword because it offers so many details of the plot it is in some ways a spoiler.
Posted by Darrell Delamaide at 2:27 PM