How to Love Wine 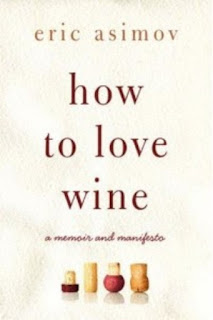 Eric Asimov's quirky book, subtitled "A Memoir and a Manifesto," has a single, simple message -- wine is one of the great pleasures of life and people should focus on enjoying it, not mastering any arcane expertise in choosing and following wine.

Though as chief wine critic for the New York Times he is part of that world, Asimov relentlessly pokes fun at wine professionals, and repeatedly embarks on scathingly hilarious takedowns of tasting notes that find obscure comparisons for the flavor components of a wine.

For Asimov, a wine is not a score based on a brief mouth rinse in a tasting involving scores of wines, but a living thing that changes over the course in time and brings the most enjoyment in the context of a meal or a gathering made more convivial by the wine. His "manifesto" is for people to stop worrying about what they don't know about wine, stop angsting over a wine menu, and, well, just eat, drink and be merry.

A typical passage: "I've become a firm adherent of the notion that wine is for drinking, not tasting. Only by drinking, swallowing, savoring, and returning to a wine, and repeating the process over time, can one really get a full and complete idea of what's in a bottle and what wine is all about."

Talking about how wine "amplifies" the affinity when friends get together: "Is it just the alcohol? That feeling of well-being inherent in a glass or two of wine? Nobody likes to talk about the buzz factor, but clearly that's a part of the wine experience. I don't mean intoxication, inebriation, or drunkenness. But alcohol is an essential part of wine. It adds a warmth and conviviality to the experience. Nonetheless, alcohol is not the decisive factor....Good wine, shared with friends and family, with a good meal, offers so much more than a buzz. It increases happiness, augments a sense of well-being, and can even comfort sadness."

I'd never read Asimov's wine columns or blogs in the Times before a friend suggested we go to a book signing with him at Weygandt's. In person, he seemed modest and affable, and this comes across in both the manifesto -- really more of a gentle nudge -- and the memoir parts of this book.

Is there enough here for a whole book? The economics of the printed book means it has to be a certain length. In five or ten years, Asimov would probably be able to achieve his goal with a shorter e-book. In this longish version, his comments about wine seem repetitious, because he really is saying the same thing over and over again in different ways. Not that it's unpleasant to meander with him through the world of being a wine critic.

The "memoir" provides what narrative structure there is. Aside from the fact that he is the nephew of the great science fiction writer Isaac Asimov and that his father was a top executive at Newsday, his youth and education are stunningly banal. While I believe he is genuinely modest, there is a false note when he disingenuously describes how to his great surprise he was hired by the Times despite his youth and lack of qualifications without at least acknowledging that his family connections might have played some role.

Ultimately, though, his personal evolution in getting to know and love wine is instructive and perhaps the only way to show readers what he means by the title, rather than just telling them. His enthusiasm is infectious, even though of course he is preaching to the choir because it's a sure bet that only people who already love wine will pick up this book.

There are times when he is too much New York. He puts a lot of stock in finding a good "wineshop" with a knowledgeable merchant who will take the time to help you identify the context of the wine you want, and if that person only rattles off some rated wines, find another shop. Easier said than done in most places outside New York. We have plenty of stores here in DC, but, for instance, I always distrusted the recommendations of the clerks at Calvert Woodley (I never shop there any more) because I felt they wanted to move some large lots they bought.

But his insistence does remind me to patronize those stores, like Weygandt's, that do make an effort to seek out wines and winemakers not on the basis of a score in Wine Spectator but because they like the wine.

I haven't quite finished the book, but I already had a lot to say about it. I'll update if I have anything to add once I do finish it.
Posted by Darrell Delamaide at 8:20 AM