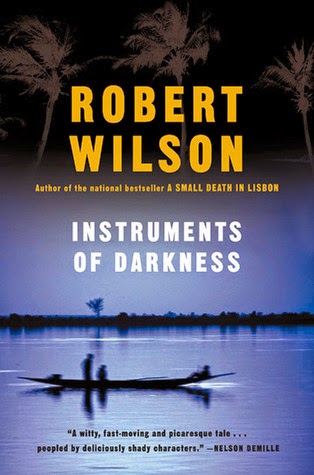 This noir thriller by Robert Wilson brings the Gold Coast of West Africa to life in all its seedy and seamy glory. The hero, Bruce Medway, shuttles back and forth between Togo, Benin and Ghana, with forays into Nigeria and a glimpse of Ivory Coast, the way the rest of us go to Baltimore or Arlington. The lawless chaos that coexists in the coastal capitals of Lome, Cotonou and Accra with the country club gentility of the white expat population is the ideal setting for a convoluted mystery involving smuggling, drugs, payoffs and treachery.

Wilson is a good writer who makes this background vivid and believable. I enjoyed his bestseller, A Small Death in Lisbon, but was unfamiliar with these earlier thrillers set in Africa until I came upon this book in the second-hand bookstore in Austin, South Congress Books. Apparently they were largely unavailable in the U.S. until the success of Lisbon.

The first-person narration is done with a jaunty, if sometimes forced, humor, but witty enough to make you laugh out loud on occasion. However, none of the characters, including the narrator, elicit any consistent sympathy from the reader. Characters that appear quirky and eccentric eventually are unmasked to be psychopathic or sadistic in a way that requires too much suspension of disbelief. The array of women characters are vampy and have an almost fetishist obsession with smoking. Medway's travails -- a succession of beatings, captivity and brushes with death -- matches Dick Francis's characters in its relentless masochism. Motivations are murky and some characters are strictly utilitarian, fulfilling their role in the plot without engaging the reader.

It is, in short, not a great book, though quite readable. It could be the indelible atmosphere of expat life in West Africa will draw me back to one of the three other novels Wilson sets in this world, but maybe not.
Posted by Darrell Delamaide at 9:28 AM