An Episode in the Life of a Landscape Painter 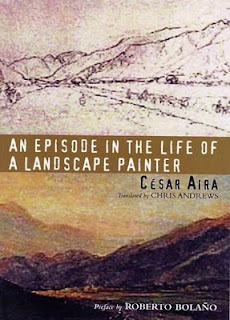 This intense little book by Cesar Aira is compelling and mysterious. At 87 pages, it is more a novella than a novel. And, like the Clint Eastwood film "Million-Dollar Baby," it starts out as one story and turns into quite another story midway through.

That initial story reminded me in many ways of the Andrea Barrett novellas in Servants of the Map. As with the British surveyors mapping the Himalayas, the German landscape painter Johann Moritz Rugendas, an historical figure, is drawn to spend long years away from his native land chronicling the lush and exotic world of Latin America in his drawings and engravings. The author describes his fascination with the flora and fauna, the geology of the landscapes he visits in Mexico, Haiti, Brazil and finally Chile and Argentina, where the action of this story takes place.

From the beginning, however, Aira focuses on his own preoccupations -- how do we perceive the world, and how do our interactions with it shape those perceptions. Rugendas develops a style of landscape painting that his patron Alexander von Humboldt dubs a "physiognomy of nature," embracing the whole of the world reflected in the painting.

As the narrative proceeds and takes its turn, the role of our own subjectivity in these perceptions becomes paramount. How Rugendas perceives his surroundings and how he translates this into his art changes because of changes in his subjective view of the world. At this point, Aira informs us that Rugendas's "physiognomy" is what we would come to call "surreal."

Rugendas's fellow artist and faithful companion Krause is a foil for these reflections. He is a platform where the reader can seek refuge from the maelstrom presented by the changes in Rugendas.

The novel, while tracing the real career of an historical figures, veers into the surreal. When the two Germans are forced to stay in a hospital in San Luis in the Argentine pampas, Rugendas tells Krause he had a nightmare filled with strange monsters. His companion informs him that this was no dream, that these strange beings, "half-man, half-animal, the results of cumulative genetic accidents" really did inhabit this hospital in the middle of nowhere. It was a revelation to Rugendas. "What an amazing coincidence! Or correspondence: it suggested that all nightmares, even the most absurd, were somehow connected with reality."

The painter was fascinated by the idea of being able to sketch an Indian raid in the area of Mendoza, a provincial capital just below the foothills of the Andes. Finally, he gets his wish and is present when the Indians emerge from the forests to raid for cattle and women. "The morning was truly glorious, perfect for a raid. There was not a cloud in the sky; the air had a lyrical resonance; birds were combing the trees. The lid had been taken off the world specifically to reveal the conflict, the clash of civilizations, as at the dawn of history."

In the brief space of this novella, Aira is metaphysical, scientific, dramatic, and, at times, surprisingly comic. His story of Rugendas is profoundly unsettling and yet it opens the reader to a new awareness of how we perceive the world around us.

I bought this book because it was a staff pick at Politics & Prose. A short preface by the late Roberto Bolano, currently everybody's favorite Latin American author, describes Aira as one of the top three or four best writers working in Spanish today.
Posted by Darrell Delamaide at 9:36 AM