The Death of Sweet Mister 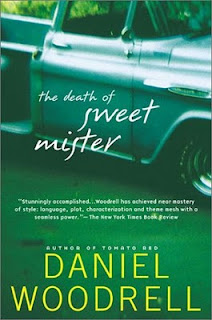 Daniel Woodrell's totally original voice is experiencing something of a breakthrough after his Winter's Bone was made into a feature film. This book, which I bought on remainder some years ago, is being reissued in March, Amazon tells me, with a new foreword by Dennis Lehane.

Reviews compare him to Faulkner or Cormac McCarthy (in his southern phase?), but this Ozarks-based writer focusing on what he knows best is something new. In this novel, the narrator, 13-year-old Shuggie Akins, describes in unrelenting detail the sordidness of his life -- the very essence of poor, white trash -- in the fictional West Table, Missouri, right on the Arkansas border. He interrupts his narration with passing observations on the beauties and wonders of the nature in this backwoods, which stand in such contrast to this life.

Shuggie's (step)father, Red Akins, is one of the meanest cusses ever portrayed in literature. He has no redeeming qualities, as he bullies and beats his wife, Glenda (Shuggie's mother), exploits the youth by sending him into homes of invalids to steal their prescription drugs, and rousts about in a totally selfish existence, gambling, drinking and womanizing on a constant high.

Someone mentioned Woodrell to me some years ago as a great read, and that's why I picked up the remainder. I grew up in part near the Ozarks, in Pittsburg, Kansas. Some of the telling details, such as Shuggie's pretending to sell the tabloid newspaper Grit as a cover for his home invasions, recall to me a world I've mostly forgotten.

The deft characterizations, lean plot, and gritty descriptions all make Woodrell well worth reading. But it is his language -- simple words, surprising metaphors, an easy virtuosity in using sophisticated language to describe painfully primitive scenes and emotions -- that mark him as a master. His books are compact -- this one is less than 200 pages -- and his oeuvre so far is relatively small, so it's an experience to be relished.
Posted by Darrell Delamaide at 8:47 AM