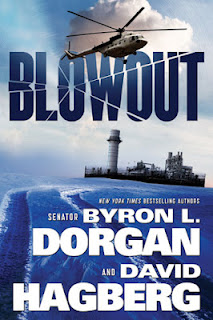 This book by David Hagberg and former Senator Byron Dorgan is disappointing. It has many elements for a successful thriller, including the input of a genuine Washington insider, but simply fails to come together.

*Spoiler alert* For starters, there is never a "blowout." While the specter of an accident in an experiment involving billions of coal-eating microbes producing methane is invoked early, a terrorist attack apparently designed to achieve that fails and that's the last you hear of it.

Instead, you have an incompetent psychopath mercenary who not only fails the first time, but fails in a second attempt to sabotage a top-secret "initiative" in Dorgan's home state of North Dakota to solve America's dependence on foreign oil by developing the ultimate clean coal -- one that doesn't have to be mined or burned but simply converted to methane, which can then be burned cleanly to fuel turbines generating electricity.

Not going to happen, but it's not a bad premise for an energy thriller. Hagberg is apparently an accomplished thriller writer and the book is easy to read. Not surprisingly, given Dorgan's involvement, it is politically correct to the nth degree and the hero is an Afghan amputee veteran who has returned home to the quiet life as sheriff in the county where this top-secret experiment is masquerading as a generating station.

There is blood and gore and a lot of time spent in the mind of the psychopath, whose motives and objectives are a jumble. The sheriff is brave, dependable, divorced by a wife who didn't sign on for life in North Dakota. His love interest is a spunky journalist, who happens to be the daughter of the general heading up the initiative, and who is amenable to quashing journalistic scoops and spending her life in said North Dakota with the sheriff.

Venezuela plays the heavy, suborning the attacks on the initiative, decapitating a special U.S. envoy, and ultimately bearing the full military wrath of the United States of America.

Even the authenticity that would be the chief benefit of Dorgan's participation comes into question when in the space of a single paragraph the authors make two geopolitical mistakes that would have embarrassed Sarah Palin. As a President Thompson is ruminating on his full plate, he thinks of a China that refuses to "devalue" its currency -- when in fact, of course, the problem is that China won't allow its currency to increase in value -- and of a "European Economic Union" on the verge of imploding -- when in fact, of course, the current European Union replaced the European Economic Community without ever being called the European Economic Union.

Small details, but telling, and it does not mean that Dorgan does not or did not know better when he was in the Senate. I'm just saying.

So give this book a pass and find a better way to spend your time.
Posted by Darrell Delamaide at 4:49 PM