Mike Bloomberg used to talk about one of the advantages old-fashioned newspapers have over digital news services like his -- random access. Paging through a newspaper, readers can find stories they didn't know they were interested in because of the size of the story or headline, the accompanying photo, its location in the paper and on the page, the very fact that it made the cut and got into print. None of this is possible in a screenful of headlines streaming by in front of you.

Likewise, browsing a bookstore is random access. There is no algorithm putting only those books in front of you that your past purchases would indicate you like, or showing you only those books that millions of others have bought. If you go into Politics & Prose, someone who knows something about books chose to put this title where you could see it, even though you had no idea you were looking for it. This is how I found Snowdrops. 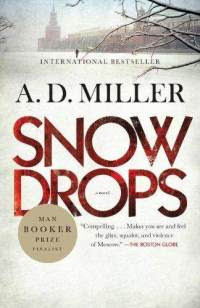 A.D. Miller's novel of contemporary Russia portrays corruption at every level. Framed as narrator Nick Platt's written confession to his English fiancee, the story is about what happened in his last winter in Moscow, where he had spent three years for his law firm. The title refers to corpses that are buried or left in the snow over the long Russian winter, only to emerge as rotting evidence during the spring thaw, making it difficult to ascertain the causes of death or to pursue any malefactors. A friend of Nick's Russian neighbor is one such snowdrop, but it is a metaphor for other types of corruption that take place over this final winter.

The novel was shortlisted for the Man Booker Prize and is beautifully written, with a lucid economy of language that keeps the narrative moving but makes every page a quiet delight. Take this description of the Cossack, a shady Russian businessman that Nick's firm is helping with project finance:


We passed the document to the Cossack. He turned the first page, turned it back again, pushed the file away, sat back in his chair, and puffed out his cheeks. He looked around as if he was waiting for something else to happen -- a strip show, maybe, or a stabbing. The blue and gold onion domes of the Novospassky Monastery winked at us through the ninth-floor window from across the Moscow River.

Then he started making jokes. The Cossack had one of those senses of humour that are really a kind of warfare. Laughing at his jokes made you feel guilty, not laughing at them made you feel endangered. His personal inquiries always felt like the prelude to blackmail.

The main narrative revolves around Nick's encounter with Masha as he helps her and her sister Katya chase off a purse snatcher in the Metro. A bachelor intoxicated in a timid English way with the licentiousness of post-Soviet Moscow, Nick is intrigued by the willowy Masha and her "growelly" voice. Masha and Katya have come from Murmansk to seek their fortunes in Moscow. Nick fears he may not be as rich or powerful as Masha was hoping for but that there might be hope for him anyway.

Somewhat to his surprise, a relationship develops. He goes clubbing with the two girls, Masha ends up in his bed, his dreams come true and they become lovers. He accompanies the two girls to a magical stay in a dacha and a sensual episode in the banya. They introduce him to their aunt, a babuschka who ended up with a large apartment in central Moscow through the privatisation that followed the fall of the Soviet Union. The aunt wants to trade his now-valuable apartment for a smaller flat on the fringes of Moscow, where she has a view of the countryside. The two girls have found a deal for her where she gets the new apartment and $50,000 in exchange for her old apartment, and ask Nick to help draw up the paperwork.

The reader knows from Nick's statements foreshadowing the end that this does not turn out well. Nick comes to suspect that the apartment trade, like the Cossack's oil project in the Arctic, may not be totally on the level. And yet in both cases he is willing to play along. The Cossack's deal is no more shady than most of the transactions his law firm handles. They have all the documents properly stamped and a surveyor has certified the suitability of the site and progress of the work there. On the apartment deal, Nick is able to gather all the appropriate papers for the aunt's side of the transaction.

As Nick readily confesses to his prospective wife, he felt much bigger in Russia than in England. He cuts short a sad trip home for Christmas where he is once again dismayed at the blandness of his parents' existence. In Russia, there was danger, there was excitement, there was an electricity in the air that made the challenges of the cold, the ubiquitous bribery and the borderline sense of lawlessness all worthwhile.

He knows that things are not what they seem, but the lure of Masha's charms on the one hand, and the chance to score a big one for the firm on the other hand, keep him going in the wrong direction, eyes wide open.

Miller's portrayal of wild and woolly Moscow rings true from everything one reads about the post-Soviet gangsterism. Nick cannot escape its corrupting influence -- but not because he is soft and innocent. Rather, Miller's point seems to be, because we all are as corrupt as the Russians at heart, even though we have put a thin veneer of civilization over the raw brutality that reigns in Moscow.

Miller maintains the atmosphere of quiet intensity throughout the narrative. There is suspense, even though the reader has a good idea of how things are going to end. Every once in a while, there is a false note -- a metaphor that is too stretched, a turn of phrase that is too cute -- but it is a debut novel. The reader remains sympathetic to Nick while facing the full extent of his corruption, but his fiancee would be crazy to marry him after reading this confession. It is, one senses by the end of the book, his way of punishing himself.
Posted by Darrell Delamaide at 8:52 AM